Ryder Cup: US move into 9-3 lead over Europe with devastating morning display

Sergio Garcia and Jon Rahm led from the front and claimed a point for Europe but their teammates missed the memo. 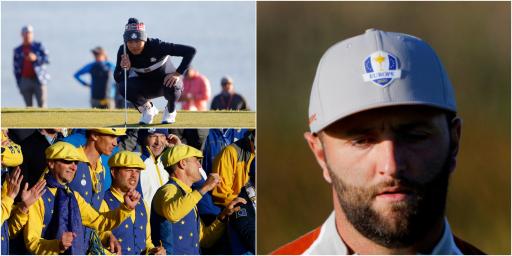 Europe's hopes of retaining the Ryder Cup are fading fast as the Americans moved into 9-3 lead after the morning foursomes.

Spanish duo Sergio Garcia and Jon Rahm took down Brooks Koepka and Daniel Berger 3&1 as they led the European's fightback.

But despite their heroics after overcoming a huge defecit early on Europe's chances of retaining the Ryder Cup look like a tall order.

It's not over but if they were to win the afternoon session 4-0 they'd still be massive underdogs going into Sunday.

Padraig Harrington's side lost the morning foursomes session 3-1 to leave themselves in a dark and deep hole at Whistling Straits.

The Europeans were without Rory McIlroy this morning who was benched by Harrington to the surprise of many.

He'll be playing in the afternoon fourballs.

They needed a fast start but their strongest pairing of Rahm and Garcia were three down through three holes in the opening match.

They rallied to get to one down through eight after Berger sent a wayward iron shot into the trap and Koepka couldn't get close.

Garcia held his putt, fist pumped and it appeared to rejuvenate the Spaniards.

Then he showed a little bit of that Seve Ballesteros magic when he chipped in on nine to get them back to all square.

A group of Spanish women in the crowd started yelling for their men.

Momentum started to shift towards the Europeans and they took the lead through 12.

They eventually took the match 3&1.

"The putt I made on eight really got me going, and then we got on a great stretch of holes," said Garcia.

Spanish duo Sergio Garcia and Jon Rahm have come back from three behind to level their foursomes match for #TeamEurope! pic.twitter.com/dcCnC63kXJ

Collin Morikawa had his putter workiong again and a fully focused Dustin Johnson played some sublime golf, chipping in for birdie early.

They beat Paul Casey and Tyrrell Hatton 2&1 in a match that ebbed and flowed but eventually went to the Americans.

Morikawa said: "To have a partner like him... it helps."

The opening part of their match was summed up when Casey completely duffed a chip.

Hatton was repeatedly seen with his hands on his hips looking frustated and muttering away to himself.

But they rallied and trailing by two Casey hit the shot of the morning, holing out at the par-4 14th.

He could see nothing at all but picked a line from the second cut of the rough and boosted their hopes at just the right time.

A positive for Harrington and his vice-captains was the play of Viktor Hovland.

He and Bernd Wiesberger dominated the front nine of their match.

But they were eventually beaten by the elite pairing of Justin Thomas and Jordan Spieth who won 2UP.

Wiesberger needed to hit a big shot coming into 18 but sent his approach into the creek as their hopes faded.

In the final match Xander Schauffele and Patrick Cantlay took down Lee Westwood and Matthew Fitzpatrick 2&1.

The afternoon fourball pairings will be announced soon.

Ryder Cup
Whistling Straits
bryson dechambeau
Steve Stricker
Padraig Harrington
Rory McIlroy
Previous
Golf fans react to Daniel Berger holing putts with his HOOD up at the Ryder Cup
Next
Bryson DeChambeau on his MONSTER drive: I swung away at it and said see ya later