Bryson DeChambeau hit one of the best shots in the history of the Ryder Cup on the 5th hole at Whistling Straits. 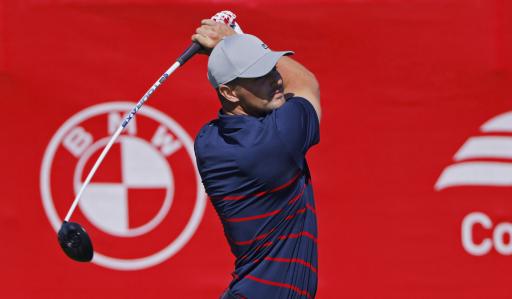 Bryson DeChambeau produced one of the best drives in the history of the Ryder Cup on the par-5 fifth hole at Whistling Straits.

DeChambeau teamed up with rookie Scottie Scheffler against World No. 1 Jon Rahm and Tyrrell Hatton in the afternoon fourballs on Friday.

On the 581-yard 5th hole, DeChambeau took an absurd line off the tee, aiming further right than anyone has before on that hole at the Wisconsin venue.

With one massive swipe of his driver, the 2020 US Open champion hit his ball a staggering 417 yards down the middle of the fairway.

DeChambeau had roughly 70 yards left to the pin and he made a fantastic eagle to draw the match all square, having been one down after four holes.

"That's not real. That is UNBELIEVABLE!"

Bryson DeChambeau hits a sensational 417-yard drive off the tee!

DeChambeau is making his second appearance at the tournament and in true Bryson-style, he caused some controversy on the first hole.

The 28-year-old hooked his tee shot off the first tee box and as it sailed left of the green, it hit a spectator on the leg. Luckily, the lady was ok and DeChambeau gave her a signed glove from his golf bag.

The big-hitting American put his bad drive behind him and played an incredible flop shot on to the putting surface, making a birdie to match Hatton's impressive birdie on the hole too.