Ryder Cup captains Luke Donald and Zach Johnson said the "honour" was not lost on them as they met with the Pope at the Vatican. 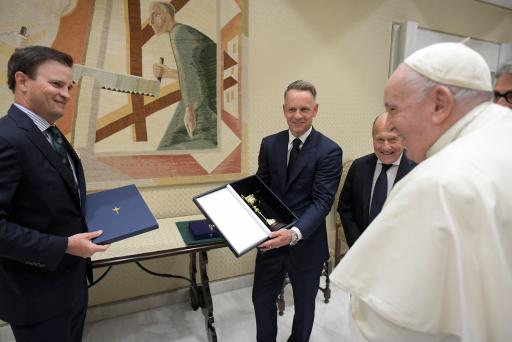 2023 Ryder Cup captains Luke Donald and Zach Johnson touched down in Rome this week for the "year to go" celebrations which of course descended into chatter about that tour and what role Tiger Woods would occupy for the U.S. side.

Johnson and Donald were involved in a number of activities such as visiting the Colosseum, hitting shots at the Temple of Venus and a gala dinner.

Although Johnson's preparations were hilariously interrupted by PGA Tour superstar Max Homa trying to charm his way into the side that will head to the Marco Simone Golf & Country Club next September.

The two skippers also got to meet the Pope at the Vatican where they gifted him an inscribed replica Ryder Cup emblazoned with the words: "Presented to His Holiness The Pope By Ryder Cup Captains Luke Donald and Zach Johnson."

"It was a very memorable experience and the honour wasn't lost on us," Johnson, 46, told the media.

Donald, 44, added: "As Ryder Cup Captain I am fortunate to be able to do many special things, but having a private audience with Pope Francis was certainly a memory that myself and my wife Diane will always cherish."

Related: Rory on Ryder Cup team? We need to rebuild...

Of course, this moment wasn't lost on social media users who decided to see the humour.

"Forgive me father, for I have thinned," one person responded. There were also queries about how His Holiness fares in foursomes.

GolfMagic decided to pick out some of the very best:

“I, along with the 10s of millions I lead and represent, have just one question: How do you keep accidentally hitting the ball on your practice swings?” pic.twitter.com/v7dDL20evr

Greg trying to get his LIV Team Captains a meeting with the Dalai Lama https://t.co/3nai34cTLr pic.twitter.com/iwK6NE97cQ

“Your Holiness, would you please pray for unity in our sport?…also, cold putters for their team.” https://t.co/KyQ3Re4Wmo

Gonna need the papa to give me his best shadow swing https://t.co/2PqLqi2jBQ pic.twitter.com/LOUi1l3b4i

Imagine being the embodiment of a 2,000-year divine institution as God's appointed emissary on Earth, and having to go shake hands with Zach Johnson. https://t.co/qInX3yVwgN

Will need His Holiness to clear up the Catholic Church’s position on shotgun starts before I can get on board with this meeting. https://t.co/3pqvfckRxd

there is an argument to be made that henrik stenson picked $40 million over the freaking pope https://t.co/felcmSWrds

I know he’s Argentinian by birth, but does he have any European blood? And what’s he like in foursomes? https://t.co/SwRrWcMSCZ

One of these men is Gary Oldman in character, and it's up to you to determine which one. https://t.co/bq5QBrdxCV pic.twitter.com/ljbAiZjAEt

father forgive me for i have thinned

Not like @Pontifex could turn down some free merch pic.twitter.com/ErIszNtKVU

The U.S. side currently holds the Ryder Cup after they battered Team Europe 19-9 at Whistling Straits last September.

Italy will be hosting for the very first time as the U.S. - who are heavy favourites - seek to end a 30-year wait to win on foreign soil.

Their last victory in Europe was at The Belfry in 1993.