LIV Golf Tour "bitterness" will be swept aside at Ryder Cup, says Donald

Luke Donald says the golf world will be united at the 2023 Ryder Cup after it was plunged into crisis after the emergence of the LIV Golf Tour. 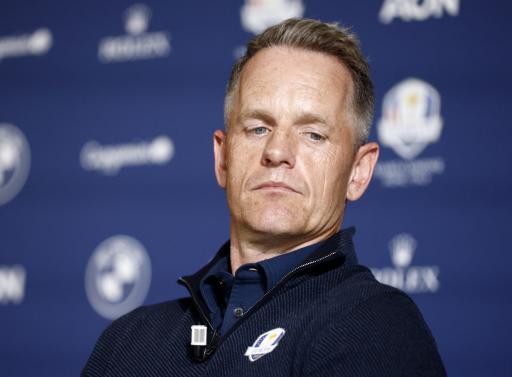 Luke Donald says the Ryder Cup is "bigger than any one individual" and next year's showdown will unite the golf world after it was plunged into crisis since the emergence of LIV Golf.

Donald, 44, faced the media on Tuesday alongside his U.S. counterpart Zach Johnson, who claimed that - despite the fact Europe are unbeaten on home soil in 30 years - his side are not favourites to retain the trophy.

Englishman Donald replaced Henrik Stenson as the captain after the Swede was sacked because he decided to join the mega-rich breakaway in LIV Golf, which is heading to Bangkok this week to make its debut in Asia.

The former World No.1 said "bitterness" will be put to one side, adding: "The history of the Ryder Cup is vital really, I think. What's so great about the Ryder Cup is that it does garner interest in a new generation of players and fans to this game. I think it's always an inspiration to the fans, to anyone."

He added: "The Ryder Cup is bigger than any individual player and it's a great way to unify everyone. I think it will continue to do that."

As for Johnson, 46, he teased the fact that Tiger Woods - who has just announced the field for the Hero World Challenge in December - will most definitely be involved at the Marco Simone Golf & Country Club in some capacity.

Related: Max Homa is campaigning for a captain's pick in the most hilarious way possible

He said: "I can tell you right now, I don't know whether he'll be here next year, but he will be part of this team in some capacity. He already is frankly.

"I can't put this mildly; he loves the Ryder Cup... he wants to be a part of it as best he can... he and I will be in constant communication."

The U.S. side will be heavy favourites considering the nucleus of the team will be similar to the sides that defeated Europe 19-9 at Whistling Straits last September and were brilliant once again as they saw off Trevor Immelman's International side 17.5 to 12.5 at the 2022 Presidents Cup.

The highest-profile players who are unlikely to be involved for the U.S. because they have joined LIV Golf include the likes of Bryson DeChambeau and Dustin Johnson, who went 5-0 last time out and was Steve Stricker's talisman.

Phil Mickelson was a potential captain or vice-captain but at present his PGA Tour bridges are well and truly burned.

As for Donald, he is in limbo. At this moment, he isn't sure whether Ian Poulter, Sergio Garcia, Graeme McDowell and Lee Westwood can be involved.

Whether or not he wants them to be is another matter.

Youngsters like Sam Horsfield and Laurie Canter would likely have a real shot of qualifying for Ryder Cup Europe pending the outcome of a court hearing in February which will determine whether or not DP World Tour chief executive Keith Pelley had the power to fine and suspend LIV players.