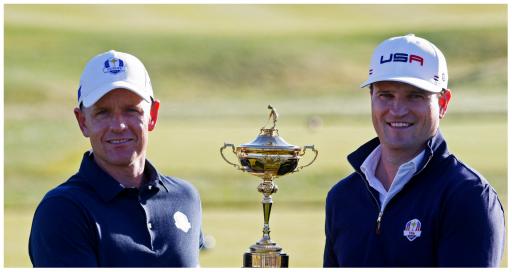 At this rate, it's probably fair to assume five-time PGA Tour winner, professional swing roaster and LIV critic Max Homa will in all likelihood play his way onto the 2023 U.S. Ryder Cup team.

Though that's not to say that he isn't already laying the groundwork for one of Zach Johnson's six captain's picks before the biennial showdown in Rome at the Marco Simone Golf & Country Club.

Johnson, 46, touched down in Italy earlier in the week to mark precisely the "one year to go" festivities with Ryder Cup Europe captain Luke Donald, who replaced Henrik Stenson after he jumped over to play the LIV Golf Tour.

The American skipper posted a before/after video getting dressed up to attend a gala dinner alongside his wife Kim. Homa responded: "U look incredibly handsome here, 2023 Ryder Cup Captain"

Well, you've got a love a trier.

After the dinner, Donald, who attended the event with his wife Diane, took part in a Q&A with Johnson.

Homa has been steadily rising up the Official World Golf Rankings over the last few years and is now No. 17.

To put that into context, in 2020, he finished the season ranked the 100th best player in the world.

He's coming into the new PGA Tour season off the back of his best performance in the FedEx Cup Playoffs. At East Lake, he picked up $2.75m for finishing T-5 at the Tour Championship.

Homa won the first event of 23' PGA Tour season - the Fortinet Championship - after Danny Willett endured a nightmare three-putt on the 72nd hole.

It marked his fifth PGA Tour victory. He went on to play a starring role at the 2022 Presidents Cup at Quail Hollow Club, going 4-0-0 to help the U.S. side defeat the Internationals 17.5 to 12.5.