Justin Thomas sang "Why can't we be friends?" as he embraced Brooks Koepka, but can the golf world finally be pals with Bryson? 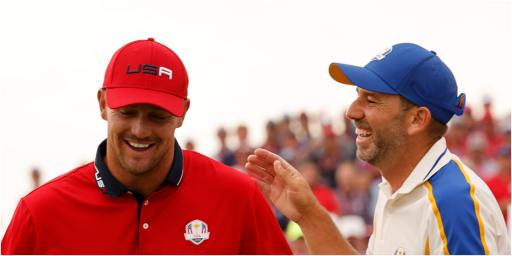 Bryson DeChambeau certainly had an interesting Ryder Cup compared to the misery he endured in Paris.

With his first tee shot at Whistling Straits he belted one out left and allegedly failed to shout fore, cracking a spectator squarely on the shin.

To give him his due, he quickly signed a ball for the injured woman and apologised profusely - before going on to make an impossible birdie.

Later he bombed a drive 417 yards down one fairway he completely bamboozled a cameraman as he was in a part of the fairway most players don't frequent.

The party didn't stop there for DeChambeau, who made an eagle on the first hole of the Sunday singles by driving the green.

To the thundering noise, DeChambeau walked off the tee box holding his armlock putter aloft before draining the 41ft putt to take an early lead against Sergio Garcia.

To put things into perspective for DeChambeau, his 3&2 victory over Garcia was such a scalp that the last time the Spaniard was defeated in the singles was against Anthony Kim. That was in Valhalla in 2008.

Fireworks on the 1st Tee @b_dechambeau drives the green...

RELATED: BRYSON AND BROOKS HUG IT OUT AFTER RYDER CUP WIN

DeChambeau was undefeated over the weekend but he was benched for the morning foursomes on day one.

He and Scottie Scheffler halved their day one fourballs match with Jon Rahm and Tyrrell Hatton.

The pair would go on to clinch a vital point against Viktor Hovland and Tommy Fleetwood, taking the day two fourballs match 3&1.

DeChambeau gets a lot of attention just because of who he is and how he approaches the game.

He was described as "classless" by Butch Harmon after DeChambeau was involved in a gimme controversy.

But this petulance was displayed on both sides and there is only one way to truly eliminate this pettiness: get rid of gimmes.

He embraced the home crowd on many occasions when on the PGA Tour he more focused on himself.

Perhaps he should ditch the flatcap for good?

Relax guys, I'm still going for the green calm down he told the home crowd during Sunday's match against Garcia.

And to top it all off he hugged Brooks Koepka in their sides post-victory press conferance.

That moment certainly didn't appear as manufactured as the PR videos the American side were pumping out before the tournament's start.

Justin Thomas sang "Why can't we be friends?" as the pair embraced.

Can the golf world finally be friends with DeChambeau?

NEXT PAGE: IS THIS THE END FOR IAN POULTER AT THE RYDER CUP?