After the speculation of how their feud would play out at the Ryder Cup, Bryson DeChambeau and Brooks Koepka put their differences aside at Whistling Straits. 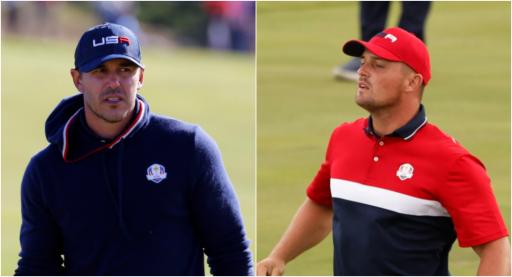 Bryson DeChambeau and Brooks Koepka shared a hug to celebrate winning the Ryder Cup, after America won the trophy back by a record margin.

DeChambeau and Koepka earned automatic places into Steve Stricker's team and there was much anticipation about how this dynamic would affect the cohesion of the US side.

As has been made clear in 2021, the pair have shared a mutual dislike for each other and the feud has rumbled on ever since the PGA Championship in May.

But this would appear to be behind them now and Justin Thomas suggested in the evening media session that they should have a hug in front of the cameras.

RELATED: RYDER CUP AFTERMATH: IAN POULTER KEEPS HIS RECORD BUT IS THIS THE POSTMAN'S END?

They guaranteed Stricker that they would settle their differences before the Ryder Cup began at Whistling Straits, and they kept to their word to produce fabulous performances.

Bryson DeChambeau and Brooks Koepka put their rivalry aside to embrace in front of the media after Team USA's #RyderCup victory over Europe ⛳️pic.twitter.com/tVmeQL64Yc

During one of their practice sessions prior to the matches, Koepka was seen approaching DeChambeau on the driving range and we all wanted to know what the pair were discussing.

DeChambeau and Koepka earned 4.5 points between them in Wisconsin, with both players securing wins over Sergio Garcia and Bernd Wiesberger in the Sunday singles to contribute to the 19-9 victory.

DeChambeau was at his usual entertaining best at the Ryder Cup. His power was on show throughout the week, including when he hit a 417-yard drive down the 5th hole in the Friday afternoon fourballs.

This was a personal highlight for the 2020 US Open champion, while in beating Wiesberger 2&1 in the singles, Koepka almost made headlines of his own.

The 31-year-old was an inch away from making a stunning hole-in-one on the par-3 17th hole, but the birdie was enough to beat the Austrian rookie.

NEXT PAGE: RYDER CUP 2020 VERDICT: "THIS IS THE GREATEST US RYDER CUP SIDE OF ALL TIME"