"We all know about the beautiful moment that happened more than 50 years ago between Nicklaus and Jacklin." 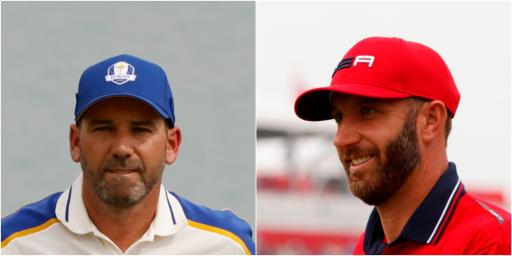 Dustin Johnson and Sergio Garcia were named the recipients of the Nicklaus-Jacklin award after the United States battered Europe at the Ryder Cup.

The award is in recognition of the two players who best embodied the spirit of the infamous 1969 concession at Royal Birkdale.

That is where Jack Nicklaus conceded a 2-foot putt to Tony Jacklin to halve the match resulting in the first ever tie in the tournament's history.

Former Masters champion Johnson went 5-0 for the week in what was an performance for the ages for the oldest player on the United States team.

He played with two rookies, Collin Morikawa and Xander Schauffele, as he became the first American to finish with the record since 1979.

Playing in his fifth Ryder Cup with the nucleus of what looks likely to become a dominating team against Europe's ageing army, Johnson was unstoppable.

"Obviously having DJ, he's an amazing player. I've said it all week, and I'm going to keep saying it, because he really is," Morikawa said.

"He's a great guy and he really made these first two days a little easier on me.

"Dustin has been one of the best players in the world for a long time, and it was amazing to have someone like that as my partner in my first Ryder Cup."

Johnson enjoyed himself in the immediate aftermath of their stunning victory and was seen downing champagne and pouring out glasses for his wife Paulina Gretzy.

Asked if he could keep up with the celebrations of his younger team mates, DJ had to stop himself from cursing as he replied: "Absofu... absolutely."

"I am so proud of my teammates and my captains and loved the help from the fans. This award is something to be very proud of. All 12 of us showed great teamwork and came together as a team," he said.

Dustin Johnson gets asked, as the old guy of the bunch, if he can out party the rest of the team.

His answer was perfect. pic.twitter.com/gDeHgvUAFR

Garcia was making his 10th appearance for the European team and performed stunningly in the face of an American freight train.

He and Jon Rahm put the first blue point on the board as Europe battled to try and stay in the contest on day one.

But he was defeated in the Sunday singles for the first time since 2008.

Garcia exemplified why this award deserved to go him as he was spotted walking alone back up the 17th fairway to watch the conclusion of Lee Westwood's match when all hope was lost.

He also said of a struggling Rory McIlroy: "I told him the absolute truth. I told him that not only me but the whole team is proud of him no matter if he goes 5-0 or 0-5; that we love him and that we are always proud of the effort that he makes and the heart that he puts into his golf and into the team. It's as simple as that."

A chip-in on 9, and after being 3DN thru 3, Garcia and Jon Rahm are tied with Koepka and Berger heading to the back.

Garcia said of his award: "We all know about the beautiful moment that happened more than 50 years ago between Nicklaus and Jacklin.

"I’m proud to be the first to win this award and thankful to Aon. I try to play the game to the best of my ability, but always with respect and I enjoy it.

"I enjoyed this week and I thought we played with good energy, which is important to show the young players that you can play with respect and have fun, even in defeat.

"I love my team. I’m so proud of all of them. I have so many amazing experiences and relationships with my team. I love the guys in that room."

NEXT PAGE: TIGER WOODS SENDS MESSAGE TO WINNING US TEAM