Has the Ryder Cup media schedule REVEALED pairings for Europe and America?

Will Rory McIlroy be paired with Norwegian rookie Viktor Hovland, or could Bryson DeChambeau team up with Scottie Scheffler? 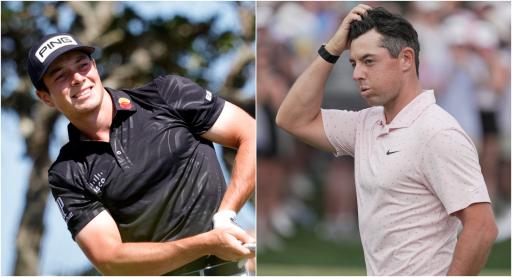 As ever in the lead-up to the Ryder Cup, everyone wants to know which golfers will be paired together and which match-ups will prove to be the most important.

In the past, we have seen some formidable partnerships form in the Ryder Cup such as Justin Rose and Henrik Stenson and Jordan Spieth and Patrick Reed.

With plenty of new faces on each team, this has led to more speculation, but now that the media availability roster for each player has been revealed, do we now know what the pairs will be?

Rory McIlroy, Viktor Hovland, Lee Westwood and Sergio Garcia have been named in the same media group, so could this be a clue as to which pairs captain Padraig Harrington is preparing?

Here is how each team broke up their roster for media availability this week. Make of it what you will:

McIlroy and Garcia played together in 2018 and both McIlroy and Westwood played with rookie Thomas Pieters in 2016, a debut role that is now taken up by Hovland.

Paul Casey and Tyrrell Hatton played as a pair at Le Golf National three years ago. They have been named in the same media group as World No. 1 Jon Rahm and Matt Fitzpatrick.

Ian Poulter has been paired with rookies in the past such as Ross Fisher, Stephen Gallacher and Jon Rahm, and he has been named in the same media group as Shane Lowry and Bernd Wiesberger.

Although the Postman is likely to be paired with McIlroy, we wouldn't be surprised if he was to take another rookie under his wing as one of the most experienced members of the European team.

As for Team USA, Jordan Spieth and Justin Thomas are almost certainly going to be paired together, having won three out of four points together in 2018.

They are in the same media group as Bryson DeChambeau and Scottie Scheffler, which would make for an interesting pair as they only have one event appearance between them.

Arguably the biggest indication that the media groups could tell us which pairs US captain Steve Stricker is planning is this next one: Patrick Cantlay, Xander Schauffele, Dustin Johnson and Collin Morikawa.

Cantlay and Schauffele played every pairs session together at the 2019 Presidents Cup, so there'll be no surprises if we see them on the first tee together on Friday.

Dustin Johnson has previously formed fruitful partnerships with Rickie Fowler and Matt Kuchar, could Collin Morikawa be his next teammate to take down the Europeans?

Brooks Koepka is in the same media group as Tony Finau, a pair that won one out of their two matches together in France. Daniel Berger and Harris English complete this media group, which could make for an exciting rookie duo.

These are all unconfirmed assumptions, however, when you consider recent Ryder Cup history and previous match-ups, you can certainly think that we have been given some significant clues with the media roster.

NEXT PAGE: BRYSON DECHAMBEAU WANTS TO END HIS FEUD WITH BROOKS KOEPKA AHEAD OF RYDER CUP