Bernd Wiesberger, Lee Westwood, Matt Fitzpatrick and Tyrrell Hatton also qualified for Team Europe after the final round of the BMW PGA Championship. 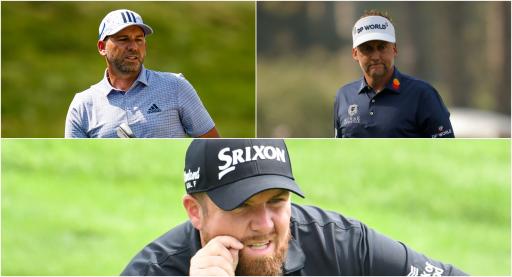 Ian Poulter, Sergio Garcia and Shane Lowry have been chosen as Padraig Harrington's three captain's picks for Team Europe at the Ryder Cup at Whistling Straits.

Garcia did not play at the BMW PGA Championship at Wentworth this week, but he has made nine previous appearances at the event and he is Europe's highest points scorer in the trophy's history.

Poulter has never lost in a Ryder Cup singles match and his passion and determination for the tournament is evident. The 45-year-old missed the cut at Wentworth this week, but he has a 14-6-2 record at the Ryder Cup.

The Englishman will welcome Lowry into the side, who has been chosen by Harrington for a rookie appearance ahead of Justin Rose.

Lowry was unfortunate not to qualify automatically after his tied 17th finish at the BMW PGA Championship, and he was edged out by Bernd Wiesberger, who finished tied 20th, eight shots behind the winner Billy Horschel.

Lowry, who gloriously won the 2019 Open Championship at Royal Portrush, commented earlier in the week about how he had endeavoured to qualify for the Ryder Cup for a number of years, and now his dream has come true.

Poulter, Garcia and Lowry join Wiesberger, Lee Westwood, Matt Fitzpatrick and Tyrrell Hatton as the players who secured their places into the team after the final round at Wentworth.

The surprise omission is Rose, who has made five appearances in his career for Team Europe. He finished in a tie for sixth place at Wentworth, three shots behind Horschel but this was not enough to persuade Harrington.

Admittedly, it has not been the Englishman's finest season. In 2021, he has only made three top-10 finishes in 17 PGA Tour events and he has missed four cuts.