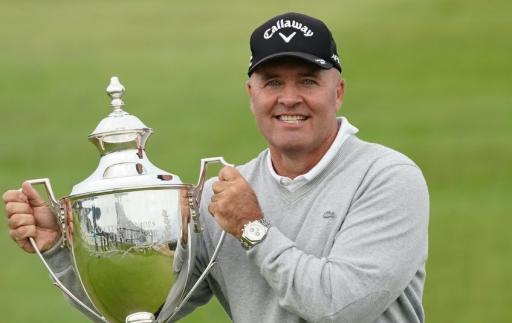 Thomas Levet may have only played in one Ryder Cup for Europe, but the Frenchman knows exactly what it's like to win the trophy on away soil.

Levet represented Team Europe in 2004 when Bernhard Langer's men absolutely destroyed America 18.5 - 9.5, which is level with their highest winning margin in the tournament's history.

Levet, who delivered a point in the singles against Fred Funk, believes it will be a very tough task for Padraig Harrington's Europe to retain the trophy on away soil.

"It's going to be tough for the European side, but you never know what can happen. It is going to be tough, the American team is very, very strong this year and their rankings in the world are just amazing," Levet said exclusively to GolfMagic.

RELATED: TIGER WOODS WILL "PROBABLY NOT" MAKE AN APPEARANCE AT THE RYDER CUP

"I don’t think we have ever seen so many Americans so high up in the rankings, they have number 2 to 8 in the world rankings. It is crazy, so let’s see what happens but it is going to be tough for Europe.

"With guys like Jon Rahm or Sergio, they are the leaders on the course. Jon Rahm has to lead that team and perform like the World No. 1, if he doesn’t, Europe doesn’t exist."

The 53-year-old has been in some fine form of his own on the Legends Tour in Europe. After winning the Legends Open de France at the start of September, he beat Markus Brier in a playoff to win the Scottish Senior Open the following week.

American Golf is an official partner of the Legends Tour and the tour shares the company's mission to promote inclusivity in golf and make it accessible to players of all ages and abilities.

In the lead up to the 2004 Ryder Cup at Oakland Hills, Levet was in fine form having just won the Scottish Open at Loch Lomond and he was one of five rookies on Langer's side.

Much like the advice that Lee Westwood and Ian Poulter have given Tommy Fleetwood, Levet tried to use the hostility and cheering from the US crowd as energy to fuel his own performance, and it evidently worked.

"The public is 90% against you or even more, they are behind the players and behind the team and they are gonna be loud, especially in America and especially the last time we won, so they will want to retake the cup and so it is going to be pretty difficult for Europe," Levet added.

"But the motivation for the European side should be that they have nothing to lose, they are away from home against a team that is very strong so they are going to go for broke, and it could work their way to because of that.

"(In 2004) I was playing my game and whatever kind of cheers there were, I thought they were routing for me and no yelling against me, so it’s so noisy and it was like motivation for me."

NEXT PAGE: MCILROY MAGIC TO BRYSON CONTROVERSY: 10 THINGS WE WANT TO SEE AT THE RYDER CUP