2023 European Ryder Cup captain Luke Donald admitted to some of the antics that Europe have got up to in the past at each of the four events the Englishman played in. 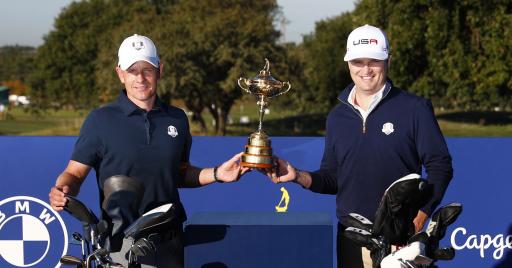 Over the last few months, Luke Donald has had to answer questions and face topics of great controversy and uncertainty concerning LIV Golf and the Ryder Cup.

The Englishman, who was announced as captain after Henrik Stenson was deposed for his move to the Saudi-backed series, has avoided passing judgement and delayed making a significant comment until the court case takes place in February.

3 LIV players took action against the DP World Tour after they were suspended and fined during the summer. An injunction was placed on the Tour which prevents them from suspending LIV Golfers from tournaments until the outcome of the hearing.

At the start of October, Donald expressed his hope that bitterness would be forgotten once the Ryder Cup comes around next September.

Until then, Donald plans on keeping relatively quiet. Nonetheless, the former World No.1 was able to let his hair down when speaking to Andrew 'Beef' Johnston and John Robins on Beef's Golf Club podcast.

Donald represented Team Europe on four occasions, winning every time. He made his debut in 2004 and he was part of the famous comeback under Jose Maria Olazabal at Medinah in 2012.

With victories come drunken and raucous celebrations and Donald let us behind the curtain and revealed some hilarious antics once the TV cameras were put away.

"All the parties have been fun. I've been lucky to play on four and win on four too. So those are fun, in 2004 we closed down an Irish bar just outside of Detriot till about five in the morning," Donald said.

"I think Darren Clarke went straight from the bar, packed his bag, went on the plane and went straight to the bar on the Virgin plane too. He did about 30 hours straight of boozing on that Ryder Cup.

"In 2006 at the K Club, David Howell was ripping his shirt off singing 'We are the Champions', some of the US guys came in so he stopped for a minute. He thinks 'is this right?' then carries on singing. Stuff like that is just immense.

"I went back to Oakland Hills for the first time a few months ago, I had a corporate day there. I was playing with one of the members," he added.

It could be a tall order for Europe to wrestle the gold trophy back in Italy next year. America beat Padraig Harrington's side 19-9 in 2021 which was a record-breaking margin.

However, Donald will be encouraged by the recent string of winners on the PGA Tour and the DP World Tour such as Robert MacIntyre, Jordan Smith and Seamus Power who could all realistically make their Ryder Cup debuts at Marco Simone.