Phil Mickelson or Zach Johnson: Who should be the next USA Ryder Cup captain?

"If the PGA of America is serious about winning Ryder Cups, they might want to consider giving Steve Stricker another shot at this." 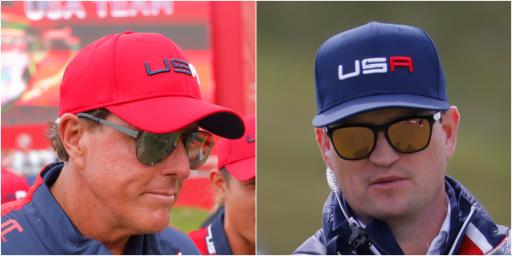 After his successful Ryder Cup winning side shuffled off the media stage to go and celebrate their victory in the club to Cypress Hill, Steve Stricker was asked one final question.

Would he take the job again? After his 19-9 rout of Europe that saw his side march to the biggest win in the modern era, would he want to waltz off into the sunset knowing this is the crown jewel in his career? Afterall, this was his major, he said in an emotional victory speech.

Stricker clearly didn't answer but his side already backed him. 100 per cent yes, Dustin Johnson said. Jordan Spieth, too, is seemingly on board. But should he? Or should the United States carry on their tradition of mixing up the captains.

There is no doubt Stricker was an excellent captain. He was relaxed and his personality meshed well with these players. They did have egos - not as bad as Tiger Woods and Phil Mickelson on the same side - buthe managed them well.

Fortune was on his side, too. It was fortunate he had the best side we've seen for many, many decades. What would it have taken to stop this American juggernaut? If Europe needed a miracle at Medinah then they needed divine intervention at Whistling Straits.

Zach Johnson is the leading candidate to take over the reins who has twice served as an assistant captain and looks like he is being groomed for the role. While there is also Mickelson. He looks like he'll be in charge at Bethpage Black two years later. Oh, and there's also Woods.

Paul Azinger, who captained the winning American side at Valhalla in 2008, made a bold statement. He told GolfWeek: "If the PGA of America is serious about winning Ryder Cups, they might want to consider giving Steve Stricker another shot at this."

While Stricker, who reportedly told his wife he was amazed their have been captains in the past who have done two tours of duty, was quick to downplay being in charge again he didn't totally dismiss it.

"I don’t think it’s going to happen. It’s mapped out and there’s guys in positions to be the next captains,” he said. "It was an unbelievable experience, don’t get me wrong; I’m glad it’s over."