Ryder Cup: Would Team Europe be BETTER off with 12 captain's picks in Rome?!

Padraig Harrington wanted the decision to be made for him but it meant out-of-form players were in his side. 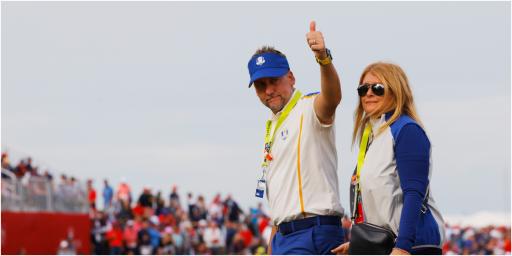 What absolute chaos this would cause if a European Ryder Cup captain had 12 picks instead of just a handful.

But is this something that should legitimately be taken into consideration as a potential new era of United States dominance emerges?

The changing of the guard is set to take shape and it's less gold stars but instead star spangled banners.

In the immediate aftermath of any Ryder Cup defeat - usually after the last putt is drained - the inquest begins in earnest.

Padraig Harrington deserves a mixture of criticism and sympathy.

If Medinah in 2012 showed us Europe can conjure up miracles then Harrington needed something other worldly to overcome an 11-5 deficit.

Of course it wasn't to be and the ice that was supposed to be used to keep the champagne cold was nursing the wounds of the European players.

One thing that is remarkably clear as Europe looks into what happened is that they need more captain's picks.

Harrington said before the Ryder Cup he wanted his players to justify their selection by qualifying automatically.

Then, he would take the remaining picks.

But in a Covid-19 disrupted calendar this - in hindsight - did not really make any sense.

Combine that with the fact that on the European Tour from May you could earn double points meant out-of-form players were in the picture on the eve of the tournament in Whistling Straits.

Lee Westwood would not have been picked, but he clung onto his automatic selection thanks to Shane Lowry flagging at the conclusion of the BMW Championship at Wentworth.

Instead, Harrington could have picked a younger player.

Guido Migliozzi or one of the Hojgaard twins. Or even Bob MacIntyre. Even Laurie Canter.

This would have given Harrington more options. Of course, he doesn't hit a shot but he is fully involved in the selection process for the pairings. It would have allowed Harrington to have a bit more room for maneuvre when his elder statesman failed to deliver.

Rory McIlroy and Ian Poulter should have been paired together, but after their drab Friday morning performance they should have been split up. The same could be said for Westwood and Matthew Fitzpatrick.

NOW WATCH: IS THIS THE COOLEST GOLF CART BRIDGE EVER?