"It’s for us to enjoy and for the American team to figure out, right?" 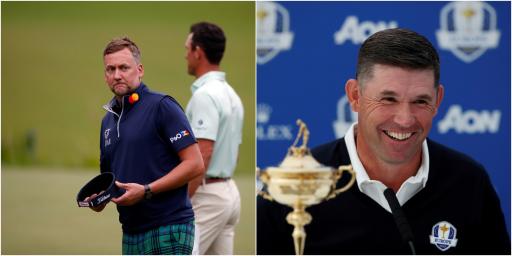 Ian Poulter simply does not care about statistics and laughs at the lazy assumptions on paper Europe should be anihilated.

This is the general way Poulter has approached the Ryder Cup in years past and how he will approach Whistling Straits.

It's the recipe for success and he's adamant it will be again when he plays in what is likely to be his seventh and final appearance as player.

Vice captaincy and eventually taking over the reins ultimately beckon.

We know he wants it.

When he puts on the blue and gold colours of the continent, Poulter simply transforms.

And the 45-year-old seemingly takes pleasure in mocking the stats guys, the naysayers and the pessimists.

Why wouldn't he? Afterall, when he's played for Europe he's won four cups and lost twice.

He's unbeaten in the singles, a streak he will so desperately seek to preserve.

He returns to his favourite competition with a bunch of top 10s this season and is in better knick than many suggest.

Whether he deserved to be selected as a captains pick remains to be seen.

He who laughs last laughs the longest.

And Poulter has made quite a habit of chuckling at the American press over the years who become perplexed their sides get turned over.

The Postman told SiriusXM PGA Tour Radio: "You know, that’s our advantage, I guess, in a way, right?

"And that is the magical question that gets asked all the time.

"That’s what has the American press scratching their head.

"That’s what has the American team scratching their heads at times, right?

"It’s for us to enjoy and for the American team to figure out, right?"

Who gives a damn. Poulter doesn't.

RELATED: A HISTORY AND COURSE GUIDE TO WHISTLING STRAITS

"There is a level of magic sauce which we’ve been able to create over the years," he added.

"And, you know, it’s not really for us to kind of discuss in a way, in terms of, you know, sharing what we have as a bond, as a team, which make us so successful.

"You know, it’s always a wonderful position to be able to go and win from that position as an underdog, because it’s not supposed to happen.

"And that’s what makes match play so amazing.

"And that’s why I think we enjoy it so much.

"We embrace each other as team members. We get on, all of us get on great.

"And, you know, we enjoy what that means.

"And, you know, we know there’s been some rift with some of the players on the U.S. team, but that’s on them, not on us.”

Golf is a numbers game but in the Ryder Cup they simply do not add up for the Americans.

Only two wins out of the last nine?

What is going on?

Poulter cares not, and walks away chuckling to himself.

NEXT PAGE: PHIL MICKELSON REVEALS THE KEY TO EUROPE'S SUCCESS