Ryder Cup: A history and guide to the Straits Course in Wisconsin

They used to fly bombs over the land, but different kinds of bombers will peg it up next week in the Ryder Cup. 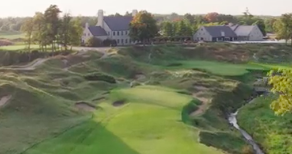 The home of the 43rd Ryder Cup has been described as a beauty and a beast.

Whistling Straits will host the next edition of this prestigious weekend in golf where players will etch their names into the history books.

Wisconsin is the host state, best known for its production of beer, cheese and home of the Green Bay Packers.

It's a state steeped in military history - reportedly they used to fly equipment and bombs over the land of the course.

But different kinds of bombers in the shape of Bryson DeChambeau and Dustin Johnson will arrive next weekend.

Before the course was built, it was an abandoned field called Camp Haven.

In the first of 18 course insights, @LukeDonald and Jim "Bones" Mackay discuss the key decisions players will make as they navigate Whistling Straits this year.@Aon_plc | #RyderCupAon pic.twitter.com/xpSERJwpFy

Legendary architect Pete Dye and his wife Alice constructed the par-71 course, which measures at 7390 yards.

It was created and bankrolled by the billionaire Herb Kohler, who made his fortune heading up the family plumbing business.

He reportedly saw the potential of golf in the area and hired Dye.

Kohler wanted an area that could host major tournaments and found 560 acres that is now the host venue.

It was originally covered in toxic waste, asbestos and fuel storage tanks which made it less than an ideal spot for a course.

But Dye was a man of vision and artistry and realised he could capture its potential.

Apparently, his brief was: "I want this course to look like it's in Ireland".

The Straits Course is where the Ryder Cup will be played.

In its history, it has hosted the PGA Championship on three occasions and the US Senior Open in 2007.

A spectacular par 5 where you're forced to take the decision to play an aggressive second shot if you're down in your match.
@Aon_plc | #RyderCupAon pic.twitter.com/DpqszA9OLO

Martin Kaymer, Vijay Singh and Jason Day have all tasted victory there.

There are eight holes that sit close to the Lake Michigan shoreline.

The greens have been described as vast, protected by deep pot bunkers and lake-sweeping winds.

RELATED: BUTCH HARMON ON BROOKS VS BRYSON AT RYDER CUP: "SUCK IT UP AND WIN A DAMN POINT"

There are a few holes that stand out.

The eighth hole measures more than 500 yards and begins with a blind tee shot.

If you're not accurate off the tee you could be in Lake Michigan.

Hole 8: On the rocks

The work players do in their practice round will be key to a successful drive on this blind tee shot.
#Aon_plc | #RyderCupAon pic.twitter.com/8OlXKwnWF7

A tricky tee shot, requiring a long iron to the green guarded by Seven Mile Creek.

It is a revered course, not for the faint of heart that is ranked in the top 20 for difficulty in the United States.

Simply put, it is one of the most breathtaking courses on planet Earth.

NEXT PAGE: GET TO KNOW THE RYDER CUP VICE CAPTAINS