Europe won the Solheim Cup for only the second time on American soil after completing a 15-13 victory at the Inverness Club in Ohio. 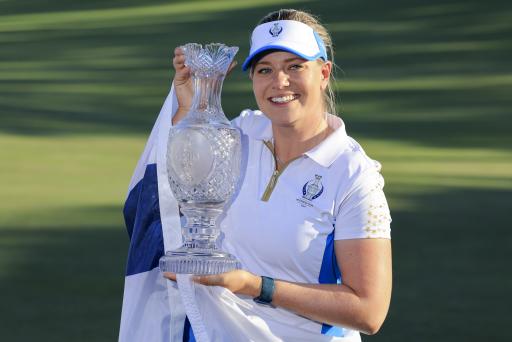 Europe sealed a fantastic and exciting victory against America in the Solheim Cup. Matilda Castren's ice-cool putt on the 18th hole secured the trophy for Catriona Matthew's side for only the second time on away soil.

Leona Maguire, Madelene Sagstrom and Celine Boutier all sealed emphatic and early points for Europe which put them on the brink of winning the trophy again.

After the top match of Anna Nordqvist and Lexi Thompson was halved, as was Nanna Koerstz Madsen's game with Austin Ernst, Europe had reached the 13-point mark and were only one away from retaining the trophy.

USA then began to mount a comeback as World No. 1 Nelly Korda, Megan Khang and Brittany Altomare all secured points to bring the scores back to 13-11.

However, with ice running through her veins, Castren rolled in a crucial par putt on the 18th hole to secure a 1up win against Lizette Salas to retain the Solheim Cup.

Many figures from the golf world took to social media to send their congratulations to Team Europe who won consecutive Solheim Cups for only the second time since the event's inception in 1990.

Many Ryder Cup heroes from years gone by such as Lee Westwood and Sergio Garcia were delighted with the result in Ohio, while World No. 1 Jon Rahm also congratulated the girls in blue and white.

Congratulations to the @SolheimCupEuro for winning the Solheim Cup! Now it’s our turn, two weeks to go!! #SolheimCup #RyderCup

Congratulations @SolheimCupEuro What a brilliant performance

Yesss!! Congratulations ladies!! @SolheimCupEuro . What an amazing tournament all round. Great golf played on both sides but glad to see our girls come out victorious.

Big congratulations to @SolheimCupEuro for a very impressive win against a very strong Team USA. Well done! Very proud of you! #goteameurope

Congratulations @SolheimCupEuro @Beany25 to win with little or no on course support was amazing. Everyone in European golf is so proud of you