Take a look at who we think will win their singles matches as the United States look set for huge victory. 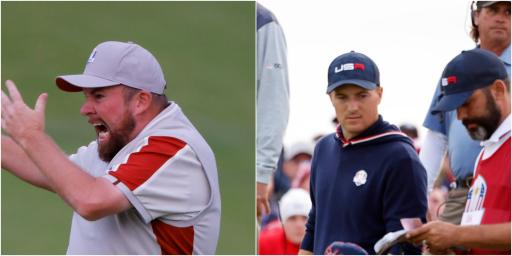 Team Europe have the chance to become the greatest Ryder Cup side ever as they attempt to overcome an 11-5 deficit.

But to do that they will have complete the improbable as so far they have faced an inspired US side led by Steve Stricker.

Stricker was part of the side that lost in Medinah in 2012 and he'll remind his side not to get too overconfident.

Here at GolfMagic we decided to look at each singles match and predict the winners and the final score prediction.

Check them out below:

Schauffele has been inspired and has already taken three points for his side.

McIlroy has looked down in the doldrums and he will need to be the catalyst for Europe.

But we expect Schauffele to take this one.

No hat Pat has been solid and it's hard to believe he's a rookie.

He's been more animated than ever as he has been fist-pumping every holed putt and close approach.

Lowry should have been played more after his performances so far.

A close affair, we expect this match to be halved.

The only match where a European is favourite.

And for good reason, too.

We think Rahm will win this comfortably.

An interesting match up.

Garcia has been a record breaker this week but he doesn't seem to care.

He's been in this position time and time again.

There is weighty expectation on DeChambeau.

But Whistling Straits is not a course to be bullied.

We think Garcia will edge this one.

These two young professionals came onto the circuit at the same time.

And they'll likely be involved in many more Ryder Cups down the road.

We expect Morikawa to take this one.

Not much to be said about this one.

And he'll win a fifth.

Let's hope Koepka doesn't have a thick bit of rough to contend with or he might get injured.

But on a serious note, he is the clear favourite here and we think he will take the point.

This is likely to be Poulter's last playing performance in the Ryder Cup.

And he's got a record to protect.

Finau has been brilliant and putted like a maniac.

JT took a knock to his confidence early on but has responded well.

He's been sensational but Hatton has also shown he's got some metal.

Much will depend on what happens beforehand, that goes without saying.

But Westwood should have an advantage here, surely, if Europe are putting on a bit of pressure?

Tough to call, but we expect the point to be shared.

Fleetwood was unlucky not to be played more.

Spieth has shown us the shot of the tournament.

It's tough to call, but we fancy Spieth in this one. Just.

Berger takes on Fitzy in the last match, who has again struggled.

We like Berger to take this one with the home support.

So what does that give us?

NEXT PAGE: CAN THE POSTMAN KEEP HIS UNBEATEN SINGLES RECORD?