Jordan Spieth must have thought the golfing gods were against him at the par-3 12th hole at Whistling Straits on Saturday afternoon. 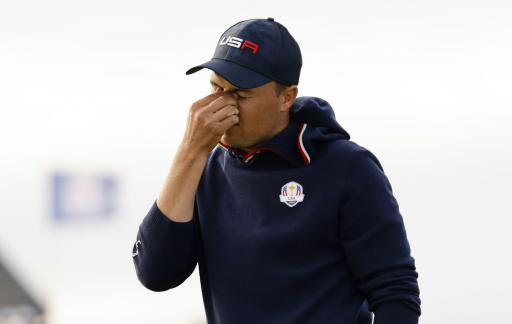 Jordan Spieth and Brooks Koepka were 1 down to the superb Spanish duo of Jon Rahm and Sergio Garcia standing on the tee box of the 12th hole, during the Saturday afternoon fourball session.

Spieth hit a fantastic shot on to the par-3 green and he had just under 15 feet for a birdie, which was a chance to win the hole as Rahm and Garcia found the greenside bunker.

The World No. 1 made par, so it was up to the three-time major champion to make it all-square in what was a tense and important match.

Spieth hit the perfect putt, well, it was almost perfect. The ball horseshoed around the cup and came back to the front of the hole. The ball then nearly fell in again, but gravity was defied and Europe were spared.

RELATED: WHAT HAS HAPPENED TO RORY MCILROY AND WILL HE DELIVER POINT AGAINST SCHAUFFELE?

With each replay that you see of the putt, it is absolutely baffling how his ball did not find the bottom of the cup, but annoyingly, these things happen in golf.

Jordan Spieth with the worst lip out in the history of the game. HOW!?!pic.twitter.com/mgPpdas5UK

The 28-year-old is known for his consistent and impressive putting displays, and this putt looked to be yet another to be sunk at a crucial time for Team USA at Whistling Straits.

The hole was halved and although Koepka birdied the 13th hole to draw the match level, the magnificent Rahm birdied the 15th and 16th holes to win one of two European points from the Saturday fourball session.

In three matches at the Ryder Cup this week, Spieth has only been able to deliver one point for Steve Stricker's side. He and Justin Thomas lost to Garcia and Rahm in the very first match in the Friday foursomes.

But in the Saturday morning foursomes, that same pair overcame the European rookie duo of Viktor Hovland and Bernd Wiesberger 2 up.

America are currently 11-5 up heading into the Sunday singles and they can almost taste victory.