Can the Postman deliver one final time or will this young American have the last laugh? 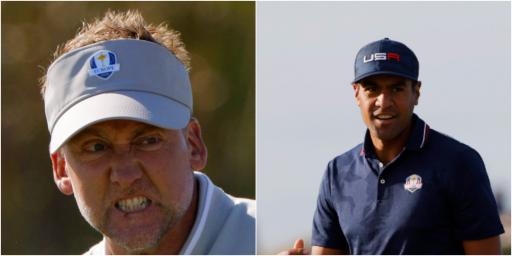 And so surely we have come to the end of Ian Poulter's Ryder Cup playing career 17 years after making his debut.

These legs might be too old for playing again, Poulter said before he was named by Padraig Harrington to join the party in Wisconsin.

But that party has so far turned out to be a damp squib as Europe have been clobbered over the first two days' play in Whistling Straits.

Now Poulter, who has given us so many memories over the years as Europe's talisman will peg it up surely for the final time as a player.

His Ryder Cup career is far from over, surely a stint as a vice captain and then as a captain for the now 45 year old beckon.

No amount of sugar coating and deflecting can detract from the fact Poulter has been pretty dreadful.

He's only offered fleeting moments of genius and looked like a shadow of his former self.

He started with typical purpose yesterday afternoon making birdie at one.

He got animated to the point of which you would have thought Europe were not down and out.

Then he and Rory McIlroy disappeared and may as well have spent the afternoon relaxing on the shores of Lake Michigan.

They offered no real resistance.

RELATED: WHAT HAS HAPPENED TO RORY MCILROY?

The montages on our television screens constantly remind us of the eye-popping Poulter on the stunning greens at Medinah in the sunset making putt after putt.

That hasn't happened and instead it was replaced with Collin Morikawa launching his wedges high up into the Sheyboygan sunset and dancing round the flags.

Then Dustin Johnson was holing putts from places on the greens where he had absolutely no business doing so.

Poulter and Rory were drubbed and left scratching their heads.

Now the man who revels in his own nickname comes up against Finau.

Be a little selfish, former Ryder Cup winning captain Ian Woosnam famously said before sending his players out at the K Club in Ireland in 2006.

Poulter needs to be a little selfish but by the time his match finishes it's likely it will be all but over.

He's known for psyching out his opponents.

That's just matchplay for you.

Surely he can do it again?

NEXT PAGE: 5 REASONS WHY US HAVE DOMINATED AT WHISTLING STRAITS