LIV Golf's Bryson DeChambeau believes Ryder Cup and Presidents Cup are "only hurting themselves" by not allowing LIV Golfers to play. 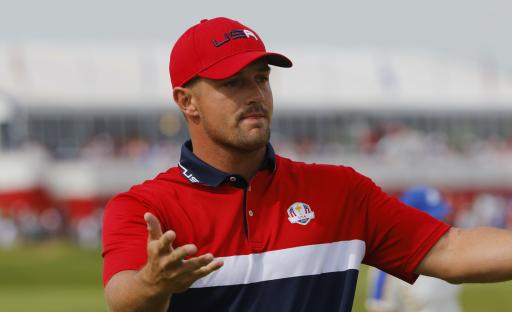 Bryson DeChambeau believes team events such as the Ryder Cup and Presidents Cup are "only hurting themselves" by not allowing LIV Golf players such as himself a chance to play.

DeChambeau, who is competing in LIV Golf Chicago this week, remains banned by the PGA Tour for his allegiance to LIV Golf and he is therefore out of the Presidents Cup that takes place next week.

LIV Golf players will also more than likely be shut out of competing in the Ryder Cup next year as things stand, especially with six captain's picks on offer for both Zach Johnson and Luke Donald.

Rory McIlroy also reiterated to the media this week how he does not want to see any LIV Golf players compete in the Ryder Cup.

That does not sit well with DeChambeau.

"I personally think that the team events are only hurting themselves by not allowing us to play, not allowing us to qualify through some capacity, in some facet, " said DeChambeau, who is the team captain of Crushers GC that also features Paul Casey, Charles Howell III and Anirban Lahiri.

"I would say, from a team aspect, it is sad that those governing bodies have not allowed us to be able to qualify. That's all I can say to that. I want to play in numerous events on the PGA Tour. It would be awesome.

"That's what LIV Golf has tried to - they have allowed us to play on the PGA Tour. It's the PGA Tour barring us from doing so."

LIV Golf CEO Greg Norman told the media this week he has "no interest" in meeting with the PGA Tour because they are "trying to destroy" LIV Golf.

DeChambeau is understood by multiple sources to have accepted north of $100 million for joining LIV Golf earlier this season.

DeChambeau also thanked Tiger Woods for creating him with the opportunity to even join LIV Golf.

"I have to look back and thank Tiger for this opportunity because he's the one that's ultimately created this."