Bryson DeChambeau described moving to LIV Golf as one of the biggest decisions of his life ahead of the fifth invitational in Chicago. 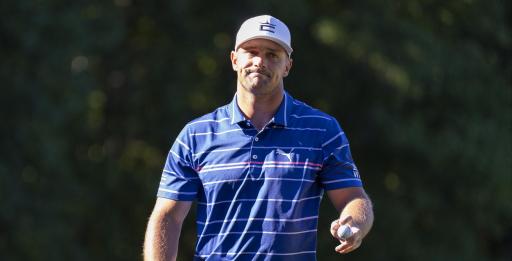 Speaking to the media on Thursday, the former US Open champion described moving to the Saudi-backed series as one of the biggest decisions of his career.

DeChambeau declared he had "ultimate respect for the PGA Tour", despite being one of seven remaining plaintiffs who have filed a lawsuit against the Tour for their suspensions.

He was thankful for the Tour on which he won eight times. DeChambeau became one of the largest crowd-drawers in 2021 as he worked relentlessly to become the biggest hitter in the game.

"I think all the challenges that have happened in the course of my life, even from when I was in high school, junior high, elementary school, they've all been warming up to this moment, to make this big decision," DeChambeau said.

"This is the biggest decision besides choosing my agent that I've ever made in my entire life, and I couldn't be happier to be over here.

"I have no buyer's remorse. I have ultimate respect for the PGA Tour and what they've done for my career, as I've said from day one, and they've allowed me this opportunity.

"I have to look back and thank Tiger for this opportunity because he's the one that's ultimately created this."

As well as attributing the rise of LIV Golf to Woods, DeChambeau also addressed the issue of world ranking points, which is a key feature that LIV can't currently offer their highly-paid players.

LIV Golf submitted an application to the Official World Golf Rankings on July 6 which Peter Dawson chairs. Dawson acknowledged the application ahead of The 150th Open Championship.

A tour must meet certain criteria such as having average field sizes of 75 players, allowing opportunities for regional players, installing a 36-hole cut and a Q-school before the start of each season.

There is also a seven-member board that makes up the OWGR: all four major championships, the PGA Tour, the DP World Tour and a member that represents the Asian Tour, the Japan Tour, the Sunshine Tour and the Australasian Tour.

"A lot of the players are part of those discussions. That's why we've all banded together," DeChambeau said about LIV's quest for ranking points.

"I cannot speak on that, because from the player meeting we had, it was very positive, a lot of great conversations back and forth between Peter Dawson, from what I could tell, and from what LIV officials could tell me, and that's all. That's all it is.

"We're going to get to a conclusion hopefully here in the coming months in regards to how this is all going to work out. But yeah, there will be tweaks. There will be adjustments on both ends.

"It's going to have to be. This has never been done before, and there has to be a compromise if we want to work effectively in this ecosystem."