Steve Stricker: I'll give Brooks Koepka a JINGLE ahead of Ryder Cup

The U.S. captain has provided a clearer update on the situation with Brooks Koepka's injury. 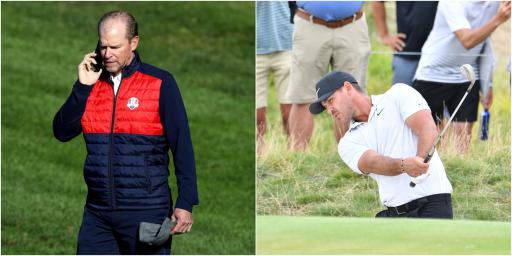 Everything for the Ryder Cup has been finalised apart from one thing: Will Brooks Koepka make the team?

The big-hitting American injured his left wrist at the Tour Championship at East Lake a few weeks ago.

He was hitting a wedge but immediately dropped the club after impact, uplifting what looked like a large root.

He carried on for a few holes but withdrew, prompting speculation about whether he will be fit for the Ryder Cup.

It was the same left wrist injury that kept bugging him in previous seasons.

A little Whistling warm up?

Love that for us pic.twitter.com/mWprDM1uW3

Team USA have arrived at the course earlier than usual as US captain Steve Stricker hopes to "get their preparation done now".

RELATED: DIVERSITY IN GOLF IS NOT JUST "HIRING WHITE WOMEN"

We want to out-prepare the other team, Stricker was quoted as saying.

But in videos of the American team and on social media of the team practising, there have been no signs of Koepka.

The Americans are remaining tight-lipped about the situation, but it's possible he could be replaced at the last minute.

Stricker told GolfWeek: “I’m leaving it up to him. Talking to him every other day. I’m just going to say that we’re focused on him playing. It sounds positive.

“He wants to be there and he’s working hard to be there. He’s rehabbing and his caddie is with him. I haven’t talked to him for a couple of days. I’ll give him a jingle tomorrow.”

NEXT PAGE: WILL ZALATORIS NAMED PGA TOUR ROOKIE OF THE YEAR