Tom Watson: "Europe lift themselves up better than USA at Ryder Cup"

Golf legend Tom Watson has captained the American side at the Ryder Cup twice in his career, experiencing both victory and defeat. 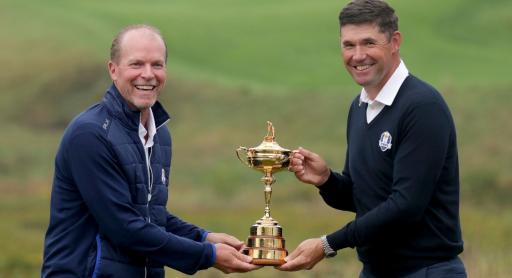 Golf legend and former US Ryder Cup captain Tom Watson believes that the European Ryder Cup team is better at "lifting themselves up" than the American team.

The US side has struggled in recent years, winning only three of the last 12 Ryder Cups and they haven't won on European soil since the 1993 matches at the Belfry, when Watson was captain.

Europe's spirit and ability to inspire each other was never more obvious than at the 2012 Ryder Cup at Medinah, when they overturned a four-point deficit on Sunday to win.

"What I love about the European team is that team lifts itself up, they literally lift themselves up and together they keep it light and keep the pressure from grabbing hold of anybody," said Watson, speaking to GolfMagic and a number of other golf media.

"I think they do that a little bit better than the American team does and that's what I suggest to the American teams. You've got to lift yourselves up and you've got to be very, very strong supporters of each other going forward and to be successful. You need that back up from your fellow players."

Watson made four appearances for America at the Ryder Cup and has captained the team twice, most recently in 2014 when Europe were victorious at Gleneagles.

America will be hoping to regain the cup when the event returns stateside at Whistling Straits in Wisconsin, where captains Steve Stricker and Padraig Harrington will be hoping for glory.

Watson, who won eight major titles in his career, is an incredibly experienced golfer and he believes the pressure of the Ryder Cup can overcome players, no matter what form they are in.

"You may be going in there playing well, but the pressure causes you not to play well. There's so much pressure at the Ryder Cup.

"I've seen it playing on the teams and as a captain, the pressure gets to the players and they don't perform, so you have to assess as the captain who is playing the best and try to team them up."

NEXT PAGE: "I FELT JOY OUT OF SEEING HIS JOY": JUSTIN THOMAS ON HIS BOND WITH MIKE VISACKI