"I felt joy out of seeing his joy": Justin Thomas on his bond with Mike Visacki

Justin Thomas has received a lot of praise for giving a helping hand to the popular mini-tour player Mike Visacki. 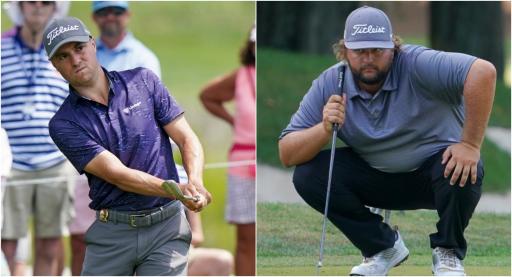 Justin Thomas has spoken for the first time since giving financial help to the popular mini-tour player Mike Visacki.

Visacki gained much attention and gained a lot of fans when he told his dad that he had qualified for the Valspar Championship at the end of April, in an emotional phone call.

The big American also received a phone call from Charles Schwab for a personal invitation to the Charles Schwab Challenge which was played last week at Colonial Country Club.

"I felt joy out of seeing his joy."@JustinThomas34 met @VisackiGolfer and felt inspired to give back. pic.twitter.com/vjG2em67Tz

Although Visacki missed the cut at both events, it was a great experience for him and Thomas wants to continue to build their special relationship.

"I know Q-school is expensive, I know playing in these events are expensive and if there's any little way I can help out then I want to. I want to be helpful with more than just money, I told him 'dude, anytime,'" said Thomas.

"I'm happy to help, I was very fortunate to have some great mentors and people willing to help me growing up and if it's the difference of him playing on mini-tours or getting his Korn Ferry card for next year, then that means more to me than any amount of money I could ever give him or anybody."

Thomas has struggled to find his best form of late. The World No. 2 won the Players Championship back in March, but this was his last top-10 finish on the PGA Tour.

The 14-time PGA Tour winner missed the cut at the PGA Championship at Kiawah Island for the first time in his career, however, Thomas will hope that his meeting with Visacki will offer him some perspective.

"It was just great because again, I haven't been in a great place mentally and on the golf course and for me, it was great because I felt joy out of seeing his joy and it totally made me forget about whats going on in my golfing life and it sometimes puts things into perspective.