The Chicago Bulls legend has had several memorable moments on the golf course - and he loves the Ryder Cup. 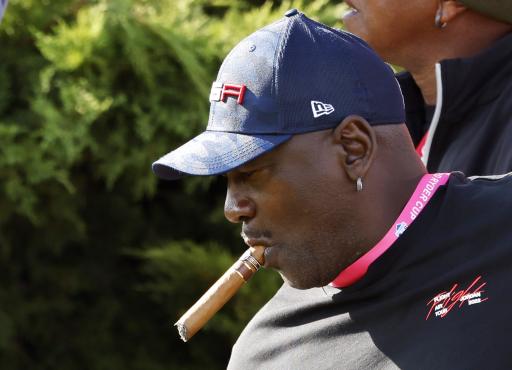 Basketball legend Michael Jordan was spotted cheering on the United States at the Ryder Cup as they dominated on day one.

The former Chicaco Bulls hall of famer is no stranger to supporting his nation and has attended the event since Valderrama in 1997.

Jordan is a massive golf fan and has admitted in several interviews he regularly plays 18 holes a day - at the very least.

And for big money too, he confessed in his Netflix's documentary The Last Dance where he talked about his time with the Bulls.

He detailed how he will spend tens of thousands of dollars gambling it up with celebrities all over the world.

The six-time NBA champion is no stranger what it means to be clutch on and off the course.

And he was spotted celebrating in style when Dustin Johnson held a tricky putt at the par-4 11th.

He held his hand aloft as the home fans went absolutely bananas.

It helped the DJ and Xander Schauffele to go three up over Bernd Wiesberger and Paul Casey.

RELATED: SHANE LOWRY TAKES A TUMBLE AT THE RYDER CUP

Jordan has had several memorable moments on the golf course.

He's allegedly had several big bets with Tiger Woods and also played golf before playing for the United States in the Olympics.

Whether or not these are true we can only guess, but one thing is for certain.

NEXT PAGE: BRYSON BOMBS DRIVE 417 YARDS AT THE RYDER CUP