Sergio Garcia and Jon Rahm won the all-important first match in the morning foursomes, but were then split up in the fourballs. 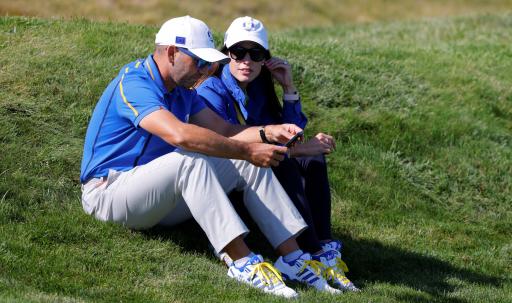 Sergio Garcia equalled the all-time record for matches won at the Ryder Cup and was then rewarded for his efforts by being dropped by European captain Padraig Harrington for the afternoon fourballs.

From a positive 1-0 start as Garcia teamed up with his Spanish compatriot Jon Rahm to defeat Team USA's star-studded pairing of Justin Thomas and Jordan Spieth, the visitors would go on to lose both foursomes and fourballs 3-1 to find themselves 6-2 down and with it all to do heading into the weekend.

The deficit would have been even greater for Europe had Tyrrell Hatton not sent a laser down the flag at 18 for birdie and a halved match alongside Rahm against Bryson DeChambeau and Scottie Scheffler.

Tommy Fleetwood and Viktor Hovland also fought hard in the afternoon for a halved match against Thomas and Patrick Cantlay, albeit the Englishman missed multiple putts inside of six feet to wrap up the match coming home.

All in all, a pretty shoddy start for Team Europe.

Harrington got it wrong on day one.

Fair enough you want to get all 12 players out there early doors, I get that.

But you could argue the American skipper had that luxury given the strength in depth of his squad.

In my eyes, dropping the experienced Garcia - who took his record Ryder Cup points tally to 26.5 points and to 23 matches won for Europe following his Friday morning foursomes victory alongside Rahm - made little sense.

Garcia should have been sent out again.

He was rock solid in the morning and even his putter was warming up nicely for a change.

The glint was back in his eye, too.

Rahm and Garcia were the bright sparks for Europe.

They were smiling, joking, laughing, and most importantly, gelling with each other as they took down best buddies Spieth and Thomas by a comfortable 3&1 scoreline.

I can assure you Garcia would have loved to have been back out there again in the fourballs, and no doubt again with Rahm.

Up against it at 3-1 down, all eyes were on Harrington and his next move for the fourballs.

Step forward Paul Casey (who failed to fire in a 3&2 loss with Viktor Hovland against Dustin Johnson and Collin Morikawa) and rookie Bernd Wiesberger for the first game of the afternoon. Sorry, what?

Perhaps Harrington had seen something in practice he wanted to try out in fourballs, but for most European fans, the pairing of Casey and Wiesberger was a surprising one.

In all fairness, Casey should have been dropped from what I saw in the morning.

Surely, and especially at 3-1 down, you would want to stick out one of your strongest duos or even your strongest player in the opening match of the afternoon session to at least try and get a blue point back on the board as quickly as possible?

Harrington even made this point after the opening ceremony when speaking to Sky Sports Golf's Nick Dougherty when he said "we know USA typically stick out one of their strongest players in the first and last match so we want to be ready for that."

As it turned out, Casey once again disappointed, and Wiesberger, to his credit, hung in there in what was his debut appearance.

There was just sadly no fire for the European team and it resulted in another loss.

By all means I'm not saying Rahm and Garcia would have definitely taken down Johnson and Xander Schauffele in that opening game of the fourballs, but I certainly feel as though they would have stuck it to them a bit more.

I was also baffled to see an out-of-form Rory McIlroy out there with Shane Lowry in the afternoon, especially given Harrington recently said he saw such an Irish pairing as a "red flag".

To be fair it probably didn't matter who went up against Tony Finau on Friday afternoon given he holed just about everything, but McIlroy and Lowry were disappointing together and could not make the birdies when required to keep pace.

Finau and his partner Harris English ran out comfortable 4&3 winners, and it marked another loss for McIlroy who went down 5&3 to Schauffele and Cantlay earlier in the day when alongside Ian Poulter.

There is plenty to ponder for Harrington's troops at 6-2 down but with another eight points up for grabs on Saturday all is not lost just yet.

Yes, some of you will say Europe have done it before from four points down heading into the final day, but let's face it, Team Europe was arguably a much stronger side collectively back in 2012.

Team Europe needs to be taking the Saturday session 5-3 in my view to pull it back to a two-point deficit at 9-7 heading into Sunday.

I want to see Harrington be braver and bolder with his pairings on Saturday.

If that means dropping an out-of-form McIlroy, or certainly Casey who could not buy a putt for most of the day, then so be it.

But please get Rahm and Garcia back out there together in match one and stick an urgent blue point on the board.

As Harrington himself has been saying all week, it's time to make it count.

NEXT PAGE: USA BUILD COMMANDING 6-2 LEAD AT THE RYDER CUP