From Mexico to Chicago to Daytona Beach in Florida, this golf fan has had an incredible journey to the Ryder Cup and the travelling continues on Sunday. 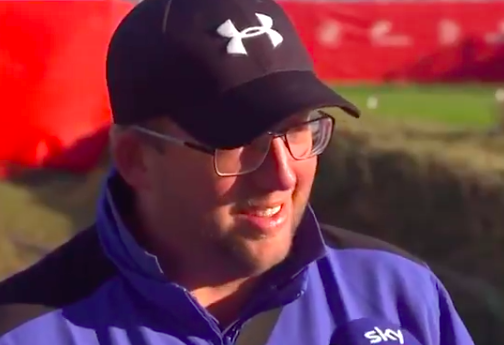 Due to travel restrictions, many European fans have been deprived of the opportunity to go and support Team Europe at the Ryder Cup this year.

It is one of the many disappointments that has been caused by the Covid-19 pandemic, but for one golf fan, he was determined to follow his dream of going to the Ryder Cup.

The man and his companions bought tickets when the event was arranged and before the world descended into pandemic chaos, however as we all know, the Ryder Cup was delayed from 2020 to now.

Nonetheless, Team Europe have a fan here that will travel far and wide to legally and safely make it to Wisconsin, even if it does mean not seeing his wife for four weeks.

However, as you can see in the video below, once the final putt is holed on Sunday, they will not be able to go straight home from America.

"We got tickets a few years ago, planned on coming last year, it got put back to this year," the fan said.

This #TeamEurope fan has some grafting to do when he gets home, after spending 28 days away from home for three days at the Ryder Cup! ⛳ pic.twitter.com/acgKsbmZPV

"Then with travel restrictions getting into the States, we were like, what are we going to do? Are we going to call it off? No, we've go to make it happen.

"So we had to go to Mexico for two weeks to be allowed into the States. Once flights and accommodation in Mexico were booked, the UK put Mexico on the red list.

"So we're not allowed to go home after the tournament because we've been to Mexico, so we've now got to go from here to Chicago, Chicago to Daytona Beach, spend a week in Florida, and then we are allowed home.

"I just want to say Jo, my wife, has been so understanding because I'm away for 28 days for a three-day golf tournament!"

Both the European players and fans are known for their team spirit and determination, and this has never been made clearer than the journey that this fan has had to make to Whistling Straits.

NEXT PAGE: IS BRYSON DECHAMBEAU CHANGING PERCEPTIONS AT THE RYDER CUP?