Despite losing his foursomes match with Ian Poulter, Rory McIlroy will play with Shane Lowry against Tony Finau and Harris English in session two. 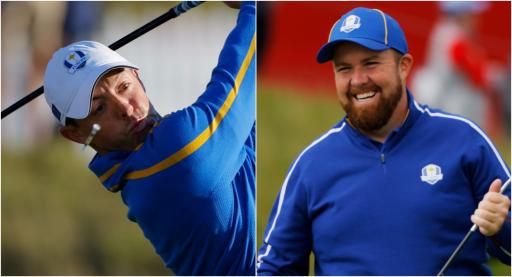 Rory McIlroy will play alongside Shane Lowry against Tony Finau and Harris English in the third afternoon fourballs match on the first day of the Ryder Cup.

McIlroy and his partner Ian Poulter were humbled by the American rookie pair of Patrick Cantlay and Xander Schauffele, losing 5&3 having been five down after five holes.

Lowry is making his first appearance at the event alongside his Irish teammate, and he will face Finau and fellow Ryder Cup rookie English.

In the opening fourball match this afternoon, Paul Casey and Austrian rookie Bernd Wiesberger will tee it up against Dustin Johnson and Xander Schauffele.

Casey and his partner Viktor Hovland lost to Johnson and Morikawa 3&2 in the morning foursomes, so the Englishman will be hoping for more luck in the fourballs.

In the second match, the World No. 1 Rahm has been sent back out to partner Tyrrell Hatton and they will face off against Bryson DeChambeau and Scottie Scheffler.

Finally, Tommy Fleetwood, who won all of his pairs matches alongside Francesco Molinari at the 2018 Ryder Cup, will team up with Hovland against Thomas and Cantlay in the fourth match.

On the first day at Whistling Straits, it was same-old, same-old for Team Europe as they haven't led after the opening session of the Ryder Cup since the 2006 matches at The K Club.