The United States started strongly in the first session of the Ryder Cup in the morning foursomes as Ian Poulter and Rory McIlroy struggled. 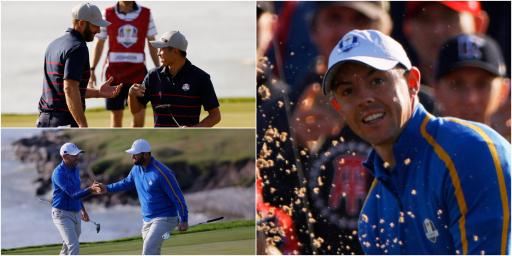 Europe's Ian Poulter and Rory McIlroy were obliterated as the United States took the opening session of the 43rd Ryder Cup 3-1.

Poulter and the Northern Irishman struggled from the beginning and were five down through the first five holes.

They rallied at the turn to get back to only three down but were soundly beaten 5&3 by rookies Patrick Cantlay and Xander Schauffele.

Europe have not led after an opening session of the Ryder Cup since 2006.

Garcia and World No. 1 Jon Rahm claimed the first point for the Europeans beating Jordan Spieth and Justin Thomas 2&1.

The duo of Thomas and Spieth battled all day but the Spaniards were too hot to handle.

Spieth produced a miracle shot at the par-4 17th when playing his shot off a vertical bank after his partner's wild tee shot.

The Texan hacked it out of the rough and nearly lost his balance running all the way back to the water of Lake Michigan.

But Thomas couldn't sink the par putt from four feet to keep the match alive.

"I felt great, the best thing about it was I knew who I had on my side. He made every putt he had to make," Garcia said.

Garcia equalled the record for most matches won at the Ryder Cup.

He took his overall record to 23 matches won for Team Europe bring him to 26.5 points won.

Garcia hit the opening tee shot and pulled it left into the trap, leaving Rahm with an awkward second.

While Thomas piped his straight down the middle to the thunderous home crowd in the amphitheatre.

The Americans started brightly and were up early in the opening two matches before Europe responded.

Steve Stricker urged his hometown fans to be respectful of the Europeans a press conference earlier in the week.

But several fans were heard shouting phrases such as: "Get in the water".

It's 6:15 a.m. CT in Wisconsin and the #RyderCup first tee is coming alive. pic.twitter.com/fZ9ELE8ePT

There were some moments of hostility, with the United States fans' behaviour criticised during the morning session.

While Matthew Fitzpatrick's caddy Billy Foster could be heard criticising a cameraman for being too loud after his player hit a shot.

Yet this did not seem to distract the Europeans early doors, with Rahm holing a huge putt at the fourth to quieten the crowd.

It ebbed and flowed but the Americans slowly began to assert their dominance.

Johnson threw darts all morning and Morikawa held putts for fun as they beat Paul Casey and Viktor Hovland 3&2.

Brooks Koepka and Daniel Berger took the third match 2&1 against a struggling Lee Westwood and Fitzpatrick.

Westwood and Fitzpatrick were fairly steady, shooting under par as a team but were edged out in the end.

The afternoon fourballs gets underway shortly.

NEXT PAGE: WHY ISN'T TIGER WOODS AT THE RYDER CUP?