Rory McIlroy jumps around, while Patrick Cantlay stumbles around - WATCH a video from the Ryder Cup After Party! 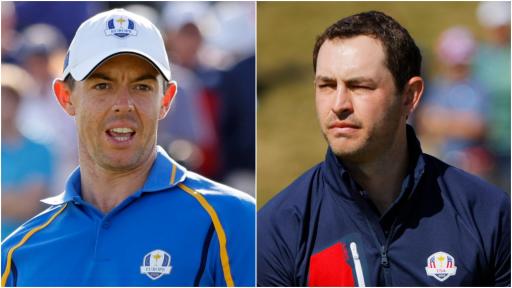 Whistling Straits may have proven a House of Pain for Team Europe but that did not prevent Rory McIlroy from joining in the Team USA celebrations at the Ryder Cup After Party.

McIlroy was spotted on the dancefloor giving it large to everyone's favourite 'Jump Around' track while alongside Xander Schauffele, whom the Northern Irishman defeated 3&2 in their Sunday Singles Match.

While the singles win marked McIlroy's first point from four games over the three days in Wisconsin, it mattered little in the grand scheme of things as Team USA trounced Team Europe by a record 19-9 scoreline.

RELATED: RORY MCILROY SAYS RYDER CUP LOSS "SUCKS" BUT IT MEANS WINNING IT BACK IN ROME WILL BE "EVEN SWEETER"

Mcllroy was reduced to tears after his match after apologising for his poor performances in the fourballs and foursomes.

He partnered Ian Poulter in the Friday Foursomes losing 5&3 to Schauffele and Cantlay, before joining Irish compatriot Shane Lowry to a 4&3 loss against Tony Finau and Harris English.

McIlroy was benched by captain Padraig Harrington for the first time in his Ryder Cup career dating back to 2010 in the Saturday Foursomes, and he then once again joined Poulter for the afternoon fourballs only to lose 4&3 to Dustin Johnson and Collin Morikawa.

A sneak peek video from the Ryder Cup After Party was posted by Schauffele's caddie Austin Kaiser.

Rory is wearing the black shirt in the middle of the video next to Schauffele, while Cantlay is in the white shirt in the background.

WATCH MCILROY'S DODGY DANCING AND CANTLAY STUMBLING AROUND IN THE BACKGROUND!

Rory wanted in on the Team USA celebrations (via austin_kaiser/IG) pic.twitter.com/bT0iDmBnBu

NEXT PAGE: PAIGE SPIRANAC ON RORY MCILROY - "WE DON'T DESERVE HIM"