What has happened to Rory McIlroy and will he DELIVER point against Schauffele?

The Northern Irishman was beaten in his most recent singles matches by Patrick Reed and Justin Thomas, but will the tide turn? 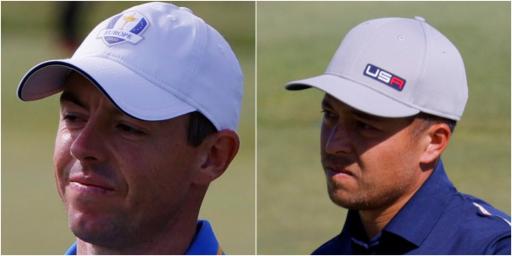 Even if Rory McIlroy was to not claim a single point at the Ryder Cup at Whistling Straits we would still be proud of him.

This was the message from Sergio Garcia when asked about a struggling Rors after claiming a point for Europe in the Saturday fourballs.

Europe will have to overcome a deficit of 11-5 if they are to retain the Ryder Cup but they will need McIlroy to finally turn it on.

Garcia was speaking after his Spanish amigo Jon Rahm came up trumps down the stretch and was holing putts for fun.

"I told him the absolute truth. I told him that not only me but the whole team is proud of him no matter if he goes 5-0 or 0-5," Garcia said.

"We love him and we are always proud of the effort he makes and the heart that he puts into his golf and into the team.

"It's as simple as that.

"But we are still very proud of every single one of our team-mates."

RELATED: WHO IS TO BLAME FOR EUROPE'S POOR SHOWING SO FAR?

So what has happened to McIlroy and will he rediscover his form in time to beat Xander Schauffele?

His overall record now stands at 11-12-4 in what is now his sixth appearance for Team Europe.

But surely what is more concerning and downright confusing is that in his last nine matches his record is 2-7.

He has of course run into formidable opponents.

At Hazeltine he and Pat Reed were both worthy winners but it was Captain America who snatched the point.

The same could be said when he lost to Justin Thomas at Le Golf National in Paris.

But he hasn't even been making birdies.

He and Poulter were giving their opponents leads by making bogeys and doubles.

Rory's driving? We haven't seen it. His fantastic long irons? Nope. He has struggled to even buy a putt.

It's possible we are just too critical of Rory because of who he is.

Afterall, he is among a group of six European players who have contributed nothing going into the final session.

On Friday McIlroy lost both matches and he hadn't even reached the 16th hole.

His misery continued on Saturday afternoon when he and Poulter were drubbed by Dustin Johnson and Collin Morikawa.

McIlroy made swing changes at the back end of last season then turned for the help of swing guru Pete Cowen.

It has resulted in Rory having a mediocre season by his standards but far from poor.

Perhaps this is just golf and his form will always come and go in waves.

Dustin Johnson and Collin Morikawa deliver once more for the hosts!

It's another day to forget for Ian Poulter and Rory McIlroy

Or maybe he just needs a break.

But before he gets that this whole thing is apparently on his shoulders.

Who can handle it better than Rory?

He loves to chase.

Imagine you're chasing down a major and you're five strokes behind Rors.

Then you can have that break you desperately need.

NEXT PAGE: 5 REASONS WHY EUROPE CAN STILL WIN THE RYDER CUP