Who is to blame for Europe's SHOCKING Ryder Cup performance so far?

Have European captain Padraig Harrington's pairings been wise, or have the players simply not turned up? 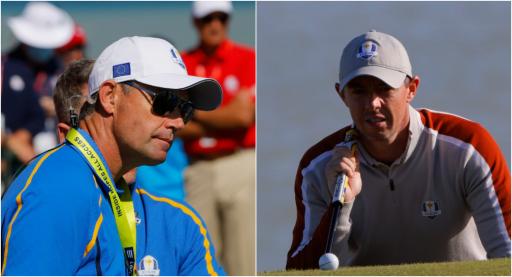 Golf is a sport of many talented individuals who have worked hard for many years to achieve their dream of playing in tournaments such as the Ryder Cup.

This is why I always feel on eggshells when criticising the top players because they are trying their absolute utmost to perform, as their livelihood and reputation is also on the line.

However, football fans never have an issue with criticising footballers for making mistakes they don't mean to make and losing matches that they desperately want to win.

Lee Westwood and Matt Fitzpatrick were constantly playing catch up in the Friday foursomes and they lost 2&1 to Brooks Koepka and Daniel Berger.

I did find it strange that European captain Padraig Harrington sent them out again in the Saturday foursomes, where they lost 2&1 again to Xander Schauffele and Patrick Cantlay.

Having had a torrid first day on Friday, Paul Casey lost both of his matches before the 18th hole and lightning struck for the third time on Saturday morning, when he and Tyrrell Hatton lost 2&1 to Dustin Johnson and Collin Morikawa.

Why did Harrington send him out for the third time? Could Shane Lowry have possibly teamed up with Hatton for both sessions on Saturday to build their partnership?

This is where I feel uncomfortable criticising players, but you have to stand up and be counted. The likes of Casey, Westwood, Rory McIlroy and Ian Poulter have not got a point between them and that is simply poor.

RELATED: RYDER CUP DAY TWO VERDICT: "THIS IS THE GREATEST US RYDER CUP SIDE OF ALL TIME"

Their experience in pressured situations should be enough to at least compete with the American superstars. McIlroy and Poulter haven't played the 16th hole yet.

To be fair to Harrington, Garcia and Lowry have turned out to be valuable sources of points and passion in the Team Europe camp. Even when all seemed lost last night, they both contributed to restoring some pride.

You also have to applaud the Americans. Steve Stricker's side has made very few critical errors and their shotmaking has been sublime.

It is hard to know who to blame and it is very easy to point the finger when things go wrong. But things have gone very wrong and the key issues are the competency in the pairing choices and the hopeless play of Europe's stalwarts.