Team USA are on the verge of a record win at the Ryder Cup, but what factors have led to this? 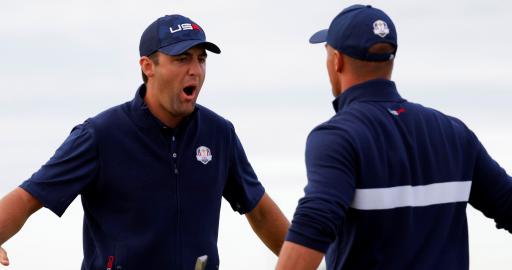 Team USA are on the verge of Ryder Cup history at Whistling Straits. They could achieve their best ever points total at the event since Team Europe was formed in 1979.

In 1981, they achieved 18.5 points and at 11-5 up in Wisconsin, they have a fantastic opportunity to break this record. It is a case of damage limitation for Europe in the Sunday singles.

US captain Steve Stricker seems to have got his pairings spot on, his preparation nailed down perfectly and he has created a motivational and cohesive atmosphere in a team of incredible individuals.

Previous criticisms of the American team have been based on players showing egos and a lack of teamwork. This American team has looked like one strong entity that simply won't be beaten.

RELATED: 5 REASONS WHY EUROPE CAN STILL CLAIM A DRAMATIC VICTORY OVER THE US IN WISCONSIN

Here are the main reasons for the USA dominating the Ryder Cup so far:

There was much talk as to how the dynamic of Bryson DeChambeau and Brooks Koepka could affect the US side in Wisconsin, but there has been no tension and if anything, there has been harmony.

Before the tournament started, Koepka and DeChambeau, who have undergone a public feud in 2021, were seen conversing on the driving range much to the US fans' delight.

In previous Ryder Cups, Dustin Johnson has formed significant partnerships with Matt Kuchar and Rickie Fowler, but as these two players did not make the US side in 2021, we were on edge to see who the World No. 2 would be paired with.

The big-hitting American has played alongside Open champion Collin Morikawa in three of the four pairs sessions and has won three points.

With the combination of power and fantastic iron play, Johnson and Morikawa could light up many a Ryder Cup in years to come.

It is no secret that the Covid-19 pandemic has severely disrupted many sports events across the world and it has prevented European fans from travelling in their droves to Whistling Straits.

With the hostility of the American spectators and the raucous support, this has clearly worked to Team USA's advantage and they have provided the intimidation factor.

RELATED: RYDER CUP DAY TWO VERDICT: "THIS IS THE GREATEST US RYDER CUP SIDE OF ALL TIME"

The European team has a lot of experienced players in their ranks with Sergio Garcia, Lee Westwood, Rory McIlroy, Paul Casey and Ian Poulter, but the latter four players have not won a point between them.

The fresh faces of Scottie Scheffler, Xander Schauffele and Collin Morikawa have taken to the Ryder Cup like ducks to water and the exuberance they have shown has been unrivalled.

Experience is very important in the Ryder Cup and these European players have earned respect, but there is a fearlessness about this American team that shows no sign of wilting.

US players on Another Level

Steve Stricker's team contains six major champions and nine out of the top 11 players in the world rankings. This result was expected, but the pure dominance and suffocation on the European side has been astonishing.

Some of the US players may be rookies by name, but not by nature. Xander Schauffele is an Olympic gold medallist and four-time PGA Tour winner, Collin Morikawa is a two-time major champion and Daniel Berger and Harris English have eight wins on tour between them.

Not to mention that Patrick Cantlay won four times on the PGA Tour in 2021 and won the FedEx Cup. Sometimes, you have to sit back and applaud a fantastic team that may be unbeatable.

NEXT PAGE: WHO IS TO BLAME FOR EUROPE'S SHOCKING RYDER CUP PERFORMANCE SO FAR?