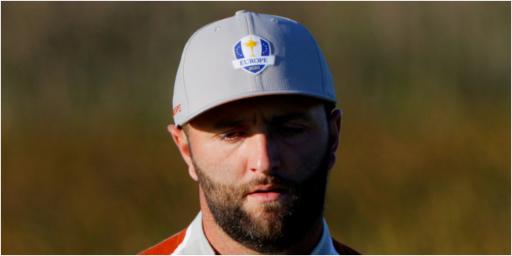 Well, if that were to happen they will need to overturn and 11-5 deficit going into the sunday singles at Whistling Straits.

This is an American team who have performed like an absolute freight train whose rookies have completely dominated.

Every point is truly priceless and if Europe are to climb out of the deep dark hole they will need to take chances.

Dustin Johnson will look to go 5-0 for the week and say absolutely nothing to the media in the process.

While no hat Pat and Collin Morikawa have always had an answer when Europe tried to get themselves back into the mix.

Even when Europe managed to get some blue up on the leaderboard on Saturday afternoon there seemed to be a sense of inevitibility about it.

This is a different American side who have had no trouble with the changing conditions.

But is all hope truly lost?

Here are five reasons can still retain the Ryder Cup.

RELATED: WHAT IS THE SCHEDULE FOR THE SUNDAY SINGLES?

The Irishman sinks a nerveless putt for par as #TeamEurope get a fourth point on the board!

Look at that emotion!

It showed Foster and the European team singing along to Sweet Caroline by Neil Diamond.

You would think they were the team with the unsurmountable lead.

If they still believe, why shouldn't we?

They have Jon Rahm

Rahm has been the standout performer so far for Padraig Harrington despite his team mates not getting the memo.

He is just always there coming up trumps.

It seems strange to say, but this man, the best golfer in the world is truly underrated.

If Rory McIlroy does the business and claims the first point, expect Rahm to win.

He is the only player on the European side who the bookies have as a favourite.

They have Ian Poulter

Okay, so he hasn't performed.

There have been glimpses but everytime he's asked a question the young rookies have swatted back his best efforts.

Poulter has a 100 per cent singles record to protect.

He won't back down.

Records are made to be broken

When the Americans won in Brookline in 1999 they won the first six matches.

If they can do that, then so can the Europeans.

The American rookies have peformed admirably, but they have never lost a Ryder Cup

Steve Stricker has said he wanted his team to think about past mistakes and learn from them.

But his rookies have never experienced the pain and anguish of losing a Ryder Cup.

Some of the Europeans of this team have, and they've been down in the trenches before.

This is new territory for them.

And it is not over.

The weight of expectation on the Americans may prove too much

Harrington has stuck to his game plan and has been described as a man who pays attention to detail.

The Europeans have absolutely nothing to lose and everything to gain.

Perhaps this will help Rory McIlroy swing more freely and win his point and be selfish.

Harrington is a man for detail.

When he was watching British tennis superstar Emma Raducanu win her maiden grandslam with Paul McGinley, he made an observation.

McGinley told Sky Sports Harrington had noticed during the second set Raducanu hit her second serve with the same ball as her first.

Until that point, she had used a different one.

It's an interesting insight into Harrington's mind and how he operates.

There will be a reason for who is he sending out and when.

Lowry backs his captain and has said "everyone says your a genius when you're winning".

The Europeans haven't played that badly, but the Americans have just been so much better.

All hope is not lost.

NEXT PAGE: WHO IS TO BLAME FOR EUROPE'S PERFORMANCE SO FAR?