What outfits are TEAM EUROPE wearing at the Ryder Cup in Whistling Straits?

Padraig Harrington's men will be playing in uniforms from Loro Piana. 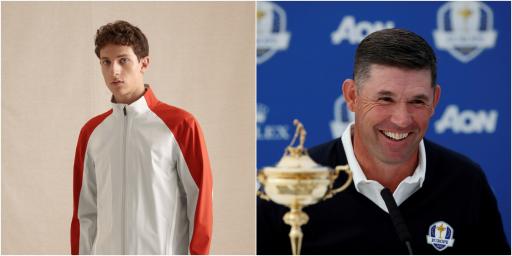 The Ryder Cup is a battle between the best of the best but more importantly it's about moments.

There are so many down the years we can list as a "Where were you?" when this happened.

One thing that stands out is you can picture these moments in your minds and what the players were wearing.

If you're European you'll remember Ian Poulter wearing the burgundy when he ignited their charge on Saturday evening at Medinah.

If you're on the other side of the pond you'll remember Leonard's brown shirt before he was swarmed on the green.

There will be a moment that stands out for you after watching this biennial event for decades.

Clothing giant Ralph Lauren will be kitting out the USA this week at Whistling Straits.

While Team Europe will be wearing Loro Piana.

The collection was in collaboration with team captain Padraig Harrington.

Loro Piana describe their clothing for the European side as sophisticated in its forms, colours and wearability.

For knitwear, they have used super-fine wool which has been elasticized to complement players' swings.

Harrington said: "As captain, I want the players to feel as comfortable as possible throughout the week of the Ryder Cup.

"And the Loro Piana clothing is a key part of that."

NEXT PAGE: WHAT OUTFITS ARE TEAM USA WEARING AT THE RYDER CUP?