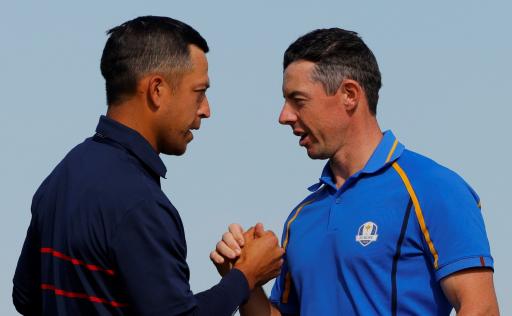 USA's Xander Schauffele will face Europe's Rory McIlroy in the first match of the Ryder Cup Singles at Whistling Straits on Sunday, with the stars and stripes leading 11-5 going into the final day.

Steve Stricker's side need just 3.5 points from the 12 matches to regain the Ryder Cup, while Padraig Harrington's team need to somehow take nine points to retain the trophy.

RYDER CUP VERDICT: "THIS IS THE GREATEST US RYDER CUP TEAM OF ALL TIME"

Patrick Cantlay, who has gone unbeaten with 2.5 points from three this week, is next off against Shane Lowry, who picked up his first point in the Saturday fourballs alongside Tyrrell Hatton.

Scottie Scheffler will battle Europe's star man and World No.1 Jon Rahm in match three, with Bryson DeChambeau next up in match four against Sergio Garcia, who has been equally impressive as his compatriot this week.

WATCH: BRYSON DECHAMBEAU MOANS ABOUT NOT BEING CONCEDED A PUTT AT THE RYDER CUP

Collin Morikawa takes on Viktor Hovland in match five, before USA's top scorer so far this week in Dustin Johnson with four points faces off against Paul Casey.

Brooks Koepka battles Bernd Wiesberger in match seven, Tony Finau clashes with Ian Poulter in match eight, and Justin Thomas takes on Hatton in what promises to be a fiesty encounter in match nine.

Harris English is up against Lee Westwood in match 10, Jordan Spieth and Tommy Fleetwood lock horns in the penultimate match, and Daniel Berger and Matt Fitzpatrick conclude things in match 12.

WATCH: JORDAN SPIETH AND JON RAHM'S CADDIE IN BUST UP AT THE RYDER CUP

NEXT PAGE: JUSTIN THOMAS CHUGS BEER ON THE FIRST TEE!