WATCH: Jon Rahm and Tyrrell Hatton react as cameraman stops to ZIP UP HIS FLIES!

One of the more comical moments at the Ryder Cup. 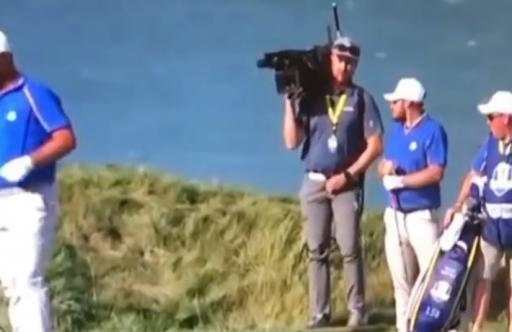 A video has emerged on social media of Jon Rahm backing off a tee shot to allow a cameraman to stop and do up his flies.

The comical incident happened during the Friday Fourballs session as Europe's Rahm and playing partner Tyrrell Hatton battled for a halve against USA's Bryson DeChambeau and Scottie Scheffler.

It's fair to say Hatton wasn't quite sure where to look.

The cameraman tried his best to zip himself up with one hand, but quickly realised he needed to drop the camera and turn around to do it up properly with two hands.

Rahm has gone unbeaten so far this week in the Ryder Cup, taking three and half points from a possible four.

Despite that, Europe has it all to do on Sunday at 11-5 down heading into the 12 Singles matches.

Rahm is up against Scottie Scheffler.

Hatton has taken one and half points from a possible three, and he faces Justin Thomas in the singles.

Here's how a number of Ryder Cup fans reacted to the video:

"Gotta two hand that zipper. Don't want a something about Mary happening."

"That's the PGA Tour every time DeChambeau pulls out driver."

"Rahm, when you get a chance, can you tuck that thing in."