Zach Johnson has been named the 2023 US Ryder Cup captain for their biennial clash with Europe in Rome. 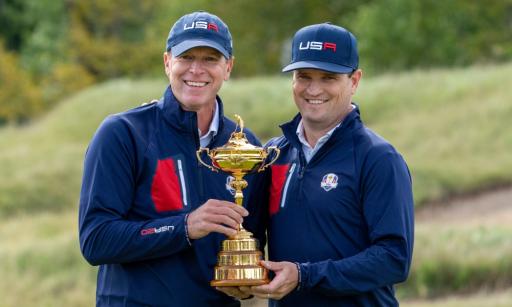 Zach Johnson has been named the 2023 United States Ryder Cup captain for the country's biennial clash with Europe at Marco Simone Golf and Country Club in Rome, according to the Associated Press.

Johnson, 45, has been given the reins of the defending champions having twice been an assistant captain at the Ryder Cup.

The American has won 12 times on the PGA Tour, highlighted by two major victories at the 2007 Masters and 2015 Open Championship.

Associated Press is reporting that Zach Johnson will be named the next U.S. Ryder Cup captain for 2023 in Rome. Solid choice, no surprise. Two-time major champion and two-time assistant captain who fits the recent profile.

Johnson has played in the Ryder Cup five times, tasting victory only once in 2016 at Hazeltine, but he did possess an impressive 3-1-1 record in the singles.

Should Johnson go on to win the Ryder Cup for USA in 2023, he would join Jack Nicklaus, Sam Snead and Seve Ballesteros as only the fourth golfer to win at Augusta National, the Old Course at St Andrews and captain a victorious Ryder Cup team.

If the U.S. wins the Ryder Cup in 2023, this will be your list of golfers who have won Augusta, the Old Course and successfully captained a winning Ryder Cup team.

Steve Stricker's 2020 United States side ran out a record-breaking 19-9 victory against the European Ryder Cup side last year at Whistling Straits.

It was pushed back a year due to the coronavirus pandemic.

Incredibly, the United States are bidding to defend the Ryder Cup for the first time since 1993 when they prevailed 15-13 at The Belfry.

The USA have, however, won two of the last three Ryder Cups.

With the strength in depth of their current stars and stripes, it would seem like Europe have an uphill battle to change the scoreline anytime soon, even with World No.1 Jon Rahm and Rory McIlroy in their lineup.

The 2023 Ryder Cup will take place in Rome, Italy, from Friday September 29 to Sunday October 1.

Team Europe have yet to confirm their next captain, with a number of names in the ring such as Luke Donald.

Lee Westwood was expected to be the new captain but he has reportedly ruled himself out the running for now.

NEXT PAGE: PHIL MICKELSON'S APOLOGY STILL SHOWS HE IS A MASTER MANIPULATOR | OPINION