Phil Mickelson's apology to the golf world tried to paint himself as the victim as he hailed LIV Golf Investments as "visionaries". 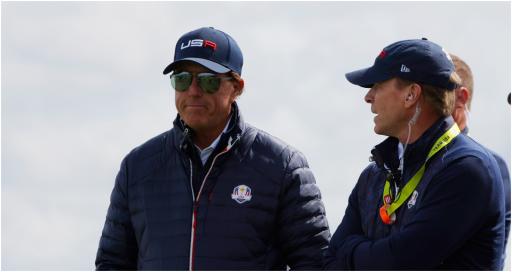 Was it just a pure coincidence that Phil Mickelson pressed "send" on his apology at the same time the PGA Tour met with its players?

Rumour has it that three minutes into their meeting, players and staff were sat with their phones out reading Mickelson's statement.

According to PGA Tour insider Dan Rapaport, the players were there to discuss a number of things with commissioner Jay Monahan.

Apparently, the players were keen to iron out the details of the Netflix documentary, the Player Impact Program and increasing prize purses.

I'm definitely keen on taking a peak at the minutes of the meeting during which Lefty broke his silence and appeared to break Golf Twitter.

"I know I have not been my best," Mickelson said at the end of his statement which was released on 22 February.

"And desperately need some time away to prioritize the ones I love most and work on being the man I want to be."

Stepping away, or perhaps suspended by the PGA Tour? They have refused to comment as to whether Lefty is at this moment banned.

Potentially, we are looking at maybe seeing Lefty back in action at The Masters alongside Tiger Woods, judging by his improved mobility.

What a strange dynamic that would be at Augusta National. Still, let's get back to Mickelson's statement and his "apology".

A general rule of thumb with an apology is expressing genuine remorse and holding your hands up.

Was Mickelson sorry for what he said or just sorry that he got caught?

His direct apology to Greg Norman's LIV Golf Investments seems to suggest that he still believes he was right.

Perhaps he just wished he could still keep up the masquerade.

When I read his statement, the first thing I thought to myself was that he was trying to paint himself as the victim.

Putting his head above the parapet to publicly take the hits for the betterment of the game. What a brave man.

This was just a poor attempt, in my opinion, of Mickelson trying to paint himself as a martyr. And it doesn't wash with me.

First, he lashed out at the biographer Alan Shipnuck saying the comments he made were "off record".

Mickelson is someone who has given media interviews for the better part of 30 years. I call bull on this one.

The first rule, before anything else is said - is to establish whether you speaking on the record or off the record.

Mickelson knows as much and to suggest that he has been the victim of lazy and gotcha journalism is an insult.

He goes on to apologize, not to the PGA Tour, but to LIV Golf Investments, whom he hails as "visionaries".

That represented a huge heel turn for someone who had previously called "scary motherf***ers".

Scary motherf***ers, or visionaries? Which is it, Phil?

Mickelson's fall from grace has been so spectacular it has drawn comparisons to that of Woods when his affairs were exposed.

I could not agree more. Mickelson will have a route back. Of course he will. Does he deserve one? Not in my eyes.

History shows us people in the public eye can disgrace themselves and still recover. Just ask Woods.

KPMG, Mickelson's sponsor since 2008, have cut ties with him in the wake of what he said.

What Callaway will do will be interesting. There has been no word, as of yet, about what his other sponsors will do.

Mickelson has spent the majority of his career battling arguably the greatest of all time.

His hall of fame career should be spoken of highly. A three time Masters champion. Six majors overall. He has 45 PGA Tour wins.

But that statement was so self-serving it would be funny were it not sad.

It really has been a pleasure watching the creativty and brilliance of Lefty.

But I shall not miss him if he never surfaces again.

Next page: Tiger Woods is asked if he trusts PGA Tour