Nelly Korda comes into the AIG Women's Open as the hot favourite, but who do you think will win the tournament? 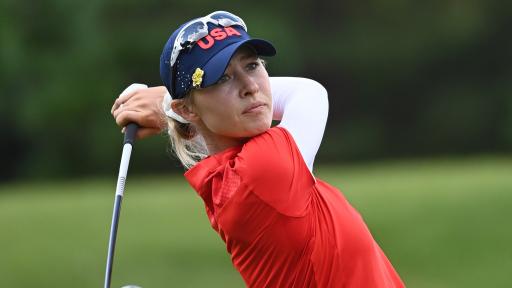 The AIG Women's Open has returned to Carnoustie this week and it has been given a huge financial boost with the biggest prize fund we have ever seen in women's major championship golf.

With the support of title sponsor AIG, the largest prize fund in women’s major championship golf has risen to $5.8 million with the winner earning $870,000.

The AIG Women’s Open takes place from 19-22 August at Carnoustie and will be played in 2022 at Muirfield, another of Scotland’s world-renowned links courses.

Nelly Korda is currently the strong betting favourite and as much as we think Korda will be the one to beat this year, we have three selections for you to sink your teeth into.

What else is there to say about Nelly Korda. She is ranked first in the Rolex Rankings and has won twice in her last four appearances on the LPGA Tour.

At the age of 23, she has won the Meijer LPGA Classic for Simply Give, the KPMG Women's PGA Championship and the Olympic gold medal in 2021. We could have a superstar on our hands here who is very much capable of lighting up Carnoustie.

Ariya Jutanugarn came fourth at the Trust Golf Women's Scottish Open, which is great form ahead of another stiff test in Scotland at the AIG Women's Open.

The 25-year-old is ranked third in the Race to CME Globe standings thanks to a win at the Dow Great Lakes Bay Invitational last month, so she is in great form and 22/1 looks to be a steal.

Leona Maguire is incredibly consistent. She has finished in the top 20 on the LPGA Tour on her last six appearances, including a runner-up finish at the Meijer LPGA Classic for Simply Give.

The 26-year-old's rookie year was in 2020 and she has risen to 8th in the Race to CME Globe standings already. She also ranked in the top 10 of scoring averages and putts per green in regulation, so she has all the attributes to go well at a tough venue such as Carnoustie.