Jeongeun Lee6 fired an incredible round of 10-under-par in France to open up a seven-shot lead at one point at the Evian Championship. 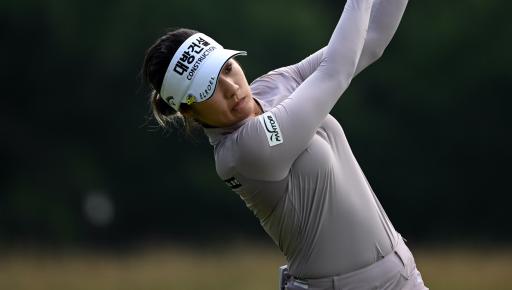 In an unbelievable round at the Evian Championship, Jeongeun Lee6 equalled the lowest ever major tournament round by shooting a 61 in France.

The South Korean began her day with a birdie on the first hole and she added another five birdies on her front nine to complete this stretch of holes in 29 shots.

Lee6, who added this number on to her name as there were other players with the same name on the LPGA Tour, added birdies on the 11th and 12th holes and then on the 17th and 18th holes to complete a superb score of 10-under-par.

The Women's US Open champion of 2019 has now equalled the record low score in a major championship set by her compatriot Kin Hyo Joo at the same venue in 2014.

This chip in was her 9th of 10 birdies on the day pic.twitter.com/NjJbD0ztSG

Lee6 opened up a seven-shot lead at the halfway point at Evian Resort Golf Club on 15-under-par, but now leads by three shots from Pajaree Anannarukarn.

The 25-year-old finished in a tie for sixth at the Dow Great Lakes Bay Invitational and came seventh at Volunteers of America Classic recently on the LPGA Tour.

In-Bee Park shot a great score of 64 in the second round to move to 7-under-par for the tournament, but she is still eight shots behind the leader.

The seven-time major winner from South Korea made a double-bogey on the first hole on Friday but then carded nine birdies to shoot 7-under-par.

NEXT PAGE: SHOULD ARMLOCK PUTTERS BE BANNED IN GOLF COMPETITIONS?