Should ARMLOCK PUTTERS be banned in golf competitions?

Rory McIlroy, Billy Horschel and Brad Faxon have all said that they would like armlock putting to be banned on the PGA Tour. 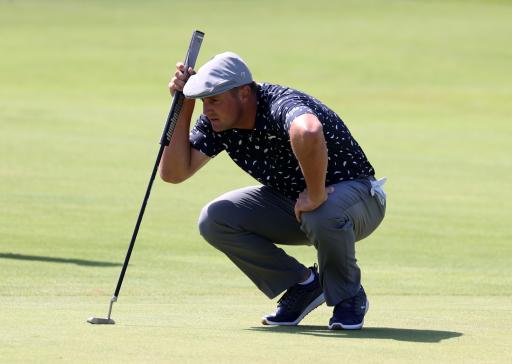 'Anchoring' was banned at the beginning of 2016 and this rule change prohibited golfers from using another part of their body to guide their putter and their putting stroke.

Players on the PGA Tour used to use the very long putters and anchor them against their chest so that they could make a more solid and steady putting stroke, but this is where the issues lied.

Now that it's not allowed, the armlock putting method has reignited the debate and to be completely honest, it is definitely a debate to be had.

Players such as Bryson DeChambeau, Will Zalatoris and Matt Kuchar have all used the armlock putting method and it has raised questions as to whether this style should be made illegal.

An armlock putter, such as the clubs that Sik Golf produce, is a long putter with a large grip and when holding the club, your left arm should remain rigid and straight.

RELATED: MATT KUCHAR IS USING A RIGHT ARMLOCK AT THE 3M OPEN!

It is a suspicious style of putting to say the least and it's purely down to the players trying to gain as much help and advantage as they can within the rules.

But is this within the rules? Former PGA Tour player and now a pundit and coach Brad Faxon has said he would like to see armlock putting banned.

Rory McIlroy and Billy Horschel have both said they would like to see the style removed from the game as well, so there is clearly an element of this that is wrong.

There is definitely use of the left arm that is unusual and it is probably illegal. The questions that I would like to see answered are: Why do the players have to use this style? Why is there a desire to push the limits of the rules?

For years upon years, conventional putting styles have been used and used to win major tournaments and PGA Tour events. Why can't every player just use a normal putting grip?

Players often experiment with their swing and they are always looking to improve through trial and error. But is there really any need to test the patience of fans and officials with a potentially illegal putting style?