Taking silver at Forest of Arden 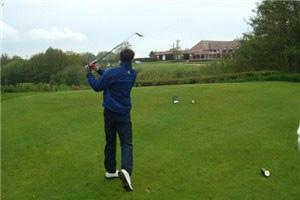 “No one gave you a chance.”

One of the first messages to fall into the Golfmagic inbox after a hard-fought second place in the Marriott Media Cup at the sublime Forest of Arden – and we’ll take it as a compliment.

Playing alongside defending champions Dan Murphy and Mark Townsend from National Club Golfer, we knew we had our work cut out if we were to trouble the prize board.

As it was, we led our playing partners for the opening 12 holes or so, before some silly mistakes crept in and blotted our scorecard.

But with worthy opponents from NCG, Sky Sports, Today’s Golfer, Golf Monthly, Bunkered and Golf News – not to mention torrential rain and hail – silver medal in this better-ball Stableford format was nothing to be sniffed at around the lovely-but-tough Arden course.

The Donald Steel-designed track, former host to the British Masters and English Open on the European Tour, played a real beast from the white tees with some par-4s requiring us to deliver from the top drawer just to find the front edge of the green. And the 6,707-yards felt a lot more in length given the soft, underfoot conditions.

While the course looks fairly modern to the eye, it is evident Steel has blended the Packington Estate layout serenely into its natural landscape. Majestic oak trees were prevalent throughout the back nine and made the course seem far more mature than it really is.

The heavens may have opened towards the end of our round but it only added to the spectacle as a plethora of deer sprinted back and forth across the immaculate fairways and under the trees.

Missing the fairway is simply no option around this Warwickshire beauty. There were times, particularly on the front nine, where it took all four of us to find a ball that had rolled a couple of feet into the first cut of lush rough. On many occasions, it was hack out onto the short stuff.

And with cleverly-positioned water hazards in front of the greens, with the terrain sloping back towards the drink, most notably on both the picturesque short par-4 fourth and stunning par-5 12th, you have to be playing from the fairway in order to find the green in regulation.

The course opens rather gently with two short par-4s but quickly unwinds into a real test from the sixth onwards. The two stand-out holes in our opinion were the tranquil par-3 eighth with water guarding the front and left side of the green and the renowned 200-yard-plus par-3 18th, requiring a well struck fairway wood across the lake.

Hindsight is a wonderful yet frustrating thing in golf. We had a three-putt from five-feet at 15. Had the first one gone in, we’d have finished joint top.

But on the calibre of our opponents, we would have taken second place from the start.

*The venue also has a second 18-hole course, the Aylesford, which opened in 1991.

* The Forest of Arden is set amid 10,000 acres of historical lakes and woodland of the Packington Estate in the heart of theMidlands.

Have you played Forest of Arden? Why not submit your own course review or share your thoughts below in the forum, on our @Golfmagic Twitter feed, or on our Facebook page?