My right royal day in Norfolk

Brancaster serves up great golf with fish and chips 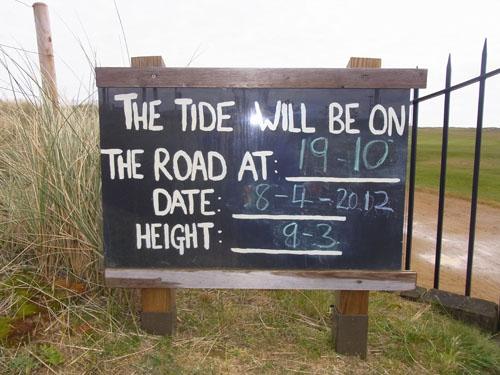 Royal West Norfolk Golf Club - or Brancaster as it is often referred to - celebrates its 120th anniversary this year and is unique in that visitors are recommended to check the time of high tide before making their trip.

In the Spring when I visited, the North Sea encroaches into the saltmarsh that separates the course from the access road. The resulting swamp can either deny entry or leave you stranded. However, playing the 8th and 9th holes with water washing around them is reputed to be a rare treat.

Growing up in Northern Ireland, home to some of the UK's best links courses - among them Royal County Down and Royal Portrush in particular - I was keen to take up the English challenge of Brancaster on the northern borders of Norfolk, just a few miles from its county rival Hunstanton.

It was hosing it down when we arrived and the hunger levels after a long drive from North London were satisfied with a quality bacon and egg on door step white. And the early impressions got better as the wind swept the rain away from the old school smoke room windows which doubled as a dining area.

We couldn't wait to get started.

Little has changed from when Holcombe Ingleby first jotted down his plans at the end of the 19th century; this is links golf in its purist form to the point where myself and my partner have to walk across a section of the beach to reach the first tee!

A two-ball only policy here is still sacrosanct and with the tide low, we set off up the first which allows for an early opening of the shoulders. Unfortunately I was confused by the red and yellow flags and hit a great approach to what turned out to be the 17th green!

Essentially the lay out is classic links with nine holes going out - apart from the demanding par-3 sixth - and nine holes coming back.

My favourite on the front nine was the right-angle dogleg par-5 eighth hole, relatively short at 494 yards where the tee shot needs to avoid marshland . The approach is classic risk and reward shot and, thankfully, with the wind prevailing I reached the green - only to three putt!

The ninth hole has a green protected by the marshes on the right but thankfully the tide was out so we managed to chip onto the green having both missed the green. This must be a frightening hole when the tide's in.

Turning back into the wind I lost the tenth to a birdie but eagled 11. Despite more elevation and small greens there were no box office holes coming back but each has its own challenge, especially the 18th where I found the greenside bunker banked by railway sleepers and carded double bogey to finish level par.

In the clubhouse, however, the best fish and chips this side of Whitby made it all worthwhile.

I can see why this course is ranked among England's top 20 and was quickly afforded royal status - both being close to Sandingham and easily accessible to its first patron, later to become King Edward VII.

Indeed four royals have captained the club over the years, the Dukes of Gloucester, Windsor and Kent (twice). It's a fantastic place to play and stay even if your playing company is limited. At least no five hour rounds here!

Special thanks to the hospitable Royal West Norfolk Golf Club, its knowledgeable secretary Ian Symington and to the Briarsfields Hotel at Titchwell (Tel: 01485 210742).

Have you ever played Royal West Norfolk?