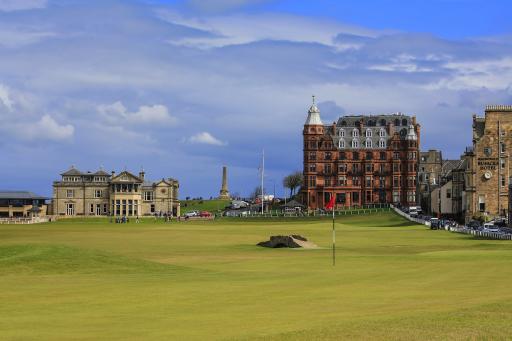 One of golf's most famous links courses, the Old Course at St Andrews, is at major risk of falling into the sea due to coastal erosion over the next 20 years, according to a report on BBC's The One Show.

The report on the popular prime time BBC show, which is broadcasting live from Glasgow as part of the BBC's COP26 coverage this week, also revealed how a total of £1.2 billion worth of infrastracture in Scotland could be threatened by 2050.

There are seven public golf courses at St Andrews - the Balgove, Eden, Jubilee, Strathtyrum, New, Castle and the Old, the latter of which is considered the most famous course not just in Scotland but in the world having hosted The Open 29 times.

It will also host next year's landmark 150th Open Championship.

But right now, there is real concern over the future of the sport at the venue known to many as the 'Home of Golf'.

"If you look at the landscape that we are in, it's quite low-lying, it's quite near the sea, and it is going to be vulnerable," a spokesperson for St Andrews Links told The One Show.

"Golf has been played here for 600 years. It should still be played here in hundreds of years from now."

CLICK HERE TO LEARN MORE ABOUT GOLF AT ST ANDREWS

According to the BBC's report, St Andrews has been working on sand dune rebuilding for a number of years now to try and counteract the effects of rising sea level.

St Andrews is looking to take sand from lower down the beach and place it onto the eroded area in a bid to fight the waves.

But the entire UK coastline is said to be in danger of flooding as a result of rising sea levels, not just St Andrews.

Dr Jim Hansom from the University of Glasgow told The One Show: "If the sand dunes are eroded away, then the flood envelope becomes much more threatening.

"Generally throughout Scotland we are running out of coastal sediment. With sea level rise, that has begun to accelerate.

"Climate change is definitely playing a part. From the 1980s to now, the rates of erosion have doubled. In fact, sometimes tripled."

This week's COP26 summit is the biggest and most important international conference the UK has ever held.

World leaders are coming together over a two-week period to discuss how best to tackle biodiversity loss and the climate crisis.