"If that story is indeed true then it's great news that the PGA Tour is doing that, truly it is." 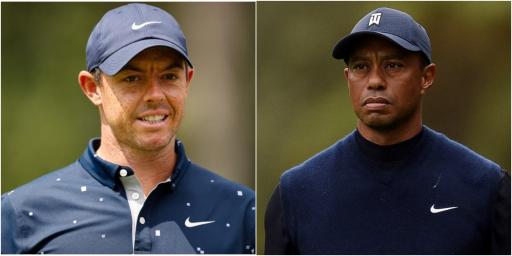 This rumour is hardly difficult to believe considering the PGA Tour will have to act.

They are said to be considering an autumn global series with big prize money, no cuts and appearance money based on Fedex Cup standings.

This claim was recently put towards Greg Norman in an interview with the Australian Golf Digest.

Norman told them: "Shouldn't that be the precedent they set, rather than being reactionary to somebody else's proposal?

"I shake my head because I'm just so perplexed about it all.

"I've been involved in golf for 40-plus years, and I think I've come up with some pretty good ideas based off a few observations.

"They're not 'Greg Norman's observations', they're simply observations the sport should be seeing for itself."

MORE: GOLFER FALLS IN WATER ON THE WAY TO A QUAD

February’s Shot of the Month

Fans have voted this shot by Tiger Woods as the best shot on the European Tour last month. pic.twitter.com/IFfkurHsCI

The PGA Tour and European Tour previously formed a strategic alliance to try and keep the proposals for a breakaway league at bay.

Threats of banning players if they were to follow the a bigger money carrot followed.

There much maligned player impact program was widely seen as a direct response.

They are rewarding players for their social media outreach off the course with sums of money that will make your head spin.

They are keeping the results of how much money each player receives private but it is obvious Tiger Woods had the biggest impact.

Woods is said to have pocketed the $8 million biggest payout.

He hasn't played since February and yet he still dominates the headlines.

After Woods, you would be able to work out the rest of the players in line for a handsome pay cheque.

Norman continued: "If that story is indeed true then it's great news that the PGA Tour is doing that, truly it is.

"It tells you that maybe, just maybe, this whole LIV Golf Investments project is the competitor that's strong enough to show the world that there are two avenues you can take.

"Who knows, maybe there are three avenues or even four? I don't care. All I know is, if you have a good, solid business plan and you can present it and execute it in the best interests of the game… hallelujah!"

NEXT PAGE: BUBBA WATSON ASKS, "WHY AM I NOT GOOD ENOUGH?"