Brooks Koepka becomes first player to defend US Open since Curtis Strange in 1989. 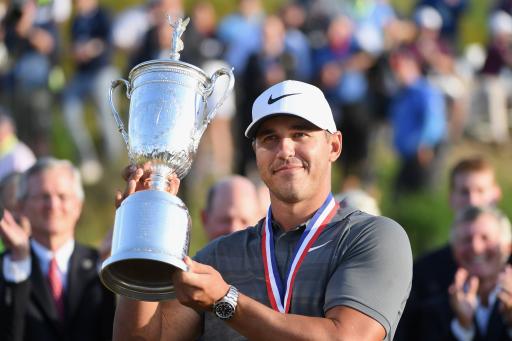 Brooks Koepka has become the first player to defend the US Open since Curtis Strange in 1989 following a one-stroke victory at Shinnecock Hills.

Koepka, 28, started the final round in a four-way tie for the lead and his round of 2-under 68 was enough to prevail by one stroke over England's Tommy Fleetwood, who fired a course record 63 to tie the lowest ever US Open score.

The win marks Koepka's third of his career on Tour with back-to-back US Open titles adding to the 2015 Phoenix Open.

IN THE BAG: THE CLUBS BROOKS KOEPKA USED TO WIN THE US OPEN

Koepka got off to the perfect start on Sunday with birdies at the second, third and fifth, before handing one back at the sixth.

The American birdied the 10th to take the outright lead when firing his short iron to within five feet of the pin, before making a heroic 12-foot putt for bogey at the par-3 11th to keep his nose in front of the chasing pack.

Koepka then moved two strokes clear when sending a wedge to three feet for birdie at the par-5 16th, and he was afforded the luxury of taking two putts for bogey at 18 to finish on 1-over par and seal consecutive US Open titles.

"To win back-to-back is truly incredible," said Koepka, who has recently battled a lengthy wrist injury.

"I've had to work very hard to get back and I did an incredible job this week.

"My motivation to get back playing golf after the injury was to win this thing again, and I'm just so happy to have done it."

Fleetwood made the biggest move early in the day and raced up the board with four birdies on his first seven holes.

A bogey came at the ninth, but then the Englishman strung together four consecutive birdies from the 12th to move into solo second on 2-over par.

But despite coming up one stroke shy of his first major title, Fleetwood took consolation from entering the record books with a tie for the lowest score in US Open history.

Dustin Johnson, playing alongside his good friend Koepka, performed better than his disastrous third-round 77 but his final-round efforts were to little avail and the world number one came up short of a second US Open title on 3-over par in third.

Masters champion Patrick Reed raced into contention with five birdies on his first seven holes, but his charge derailed on the back nine and he carded a 68 to finish fourth on 4-over par.