Dustin Johnson shoots 77 on brutal day at US Open, falls into four-way tie for lead 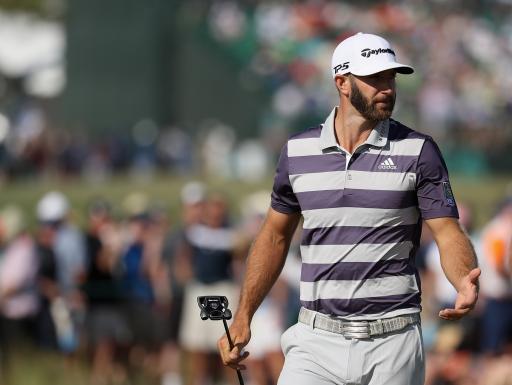 Dustin Johnson carded a third-round 77 on a brutal day of afternoon scoring at Shinnecock Hills, but holds a share of the lead heading into the final round of the US Open.

Johnson double-bogeyed the second and then made four bogeys in five holes from the fourth to fall out of the lead for the first time since Thursday.

The 2016 US Open champion responded well with a superb birdie-two at the 11th, but then made bogeys at the 15th and 18th to fall back into a four-way tie for the lead.

Daniel Berger and Tony Finau made the big moves on Saturday with superb rounds of 66 earlier in the day, and they join Johnson and last year's winner Brooks Koepka, who posted a respectable 72.

"I'm so happy to be done," said Koepka, who is bidding to become the first player since Curtis Strange in 1989 to win back-to-back US Open titles.

"There was really no grass on the greens towards the end. It is what it is. This is a US Open and you've got to try and gut it out."

Justin Rose bogeyed the last for a 73 but the Englishman is still very much in contention for a second US Open title at 4-over par.

Sweden's Henrik Stenson went round in 74 and sits a further shot back on 5-over, with Masters champion Patrick Reed and Thailand's Kiradech Aphibarnrat on 6-over par.

Despite the brutal conditions and a number of players complaining about "borderline" pin positions, particularly at 13 and 15, it was Phil Mickelson who caused the biggest talking point of the day after hitting his ball on the 13th green while it was still moving and about to go down a slope and off the green.

WATCH: PROS REACT TO MICKELSON HITTING HIS BALL WHILE IT WAS STILL MOVING