Bryson DeChambeau endures SHOCKING BACK NINE and a STREAKER at the US Open! 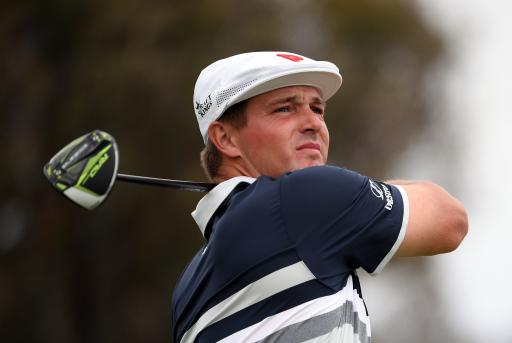 Bryson DeChambeau appeared all set to emulate his good chum Brooks Koepka by winning back-to-back US Open titles as he moved serenely into a one-shot lead around the turn at Torrey Pines. Then it all went very badly wrong.

He even had to overcome a streaker interfering with his game on the 13th hole, before being clotheslined by a police officer.

DeChambeau's 'bomb and gauge' strategy certainly backfired on the final day as the PGA Tour's biggest hitter found just three of 14 fairways, and despite going out in a respectable 33 shots to hit the front, came back in a disastrous 44 shots for a round of 6-over 77.

The defending champion's Sunday struggles unfolded at the par-3 11th when carving his tee shot down a hill into some deep rough, and despite an impressive chip to 15 feet could not bury the putt to maintain the lead.

DeChambeau then compounded that mistake on the 12th with an errant tee shot down the right and again despite a good recovery to find the green, went on to three-putt for back-to-back bogeys.

RELATED: GOLF FANS FUMING THAT BRYSON DECHAMBEAU FAILED TO SHOUT FORE AT THE US OPEN

Then the wheels really came off at the par-5 13th, a hole in which DeChambeau would no doubt have been licking his lips at the prospect of getting back into the championship.

DeChambeau once again fired his drive down the right hand side into the rough after appearing to slip on the tee. He then failed to find the fairway with his second shot, and then dumped his third shot from the rough into the greenside bunker short of the green.

From there, DeChambeau air-mailed the green and took three more to get down for a double-bogey seven and end his chances of defending the US Open, which Koepka had done in 2018.

Three pars followed for DeChambeau to calm things down slightly, but then with all hope of the tournament gone, he made a shocking quadruple-bogey eight after once again driving into trouble - this time down the left side into the penalty area.

DeChambeau then got himself into even more trouble when finding the rough with his next shot, and after several more hacks and a two-putt from 12 feet, it would go down on the card as an eight to send him into a tie for 26th on 3-over par for the tournament.

"I slipped twice on 13. I mean, that was really weird," said DeChambeau.

"I don't know what happened. But that's the game. I've got to be better at not slipping because I've done it before but never to that extent. Two times in a row on the same hole, it was kind of weird.

"I put myself in a bad place, and then I hit it up -- we had a bad line, and hit it in the right rough, and you just can't be there and you're dead.

"Ultimately then there was a streaker that came around, and I had no idea what happened with that. I'm just glad an officer clotheslined him. That was fun. Then took him down and got him out like he should be.

"Unfortunately, had bad break after bad break happen. I played two little shots next to the green, both weird lies, both trying to get cute with them and messed up on 13."

One journalist then asked DeChambeau how he could just come off the rails on the back nine having previously not made a bogey for nearly 36 holes of golf.

Only DeChambeau was having none of it.

"I didn't get off the rails at all, that's golf," DeChambeau hit back.

"People will say I did this or did that, and it's just golf. I've had plenty of times where I hit it way worse than today and I won.

"It's just one of those things where I didn't have the right breaks happen at the right time. I could have easily gotten to 7-, 8-under today.

"I just wasn't fully confident with the golf swing and just got a little unlucky in the rough and a couple other places."

Rory McIlroy was another player to suffer a miserable back nine when in contention for a first major title in seven years.

McIlroy had moved to within one shot of DeChambeau around the turn, but he too suffered at the hands of the 11th and 12th with a bogey and double-bogey to drop off the pace.

Despite a birdie at the par-5 13th when finding the green in two shots, McIlroy handed a shot back at the 16th to end his hopes of a second US Open triumph, but he would finish a 1-under par in a tie for seventh.

Brooks Koepka made a late charge for a third US Open victory but came unstuck with bogeys at the 16th and 18th to finish four shots behind Rahm on 2-under par.

Collin Morikawa was another big-name player to throw away his chances of a second major victory after making a double-bogey at the 13th hole when shanking his fourth shot over the back of the green.

He would finish on 2-under par alongside Koepka and Guido Migliozzi, who carded a stunning round of 68 in his first-ever major championship.

NEXT PAGE: HOW MUCH THEY ALL WON AT THE US OPEN